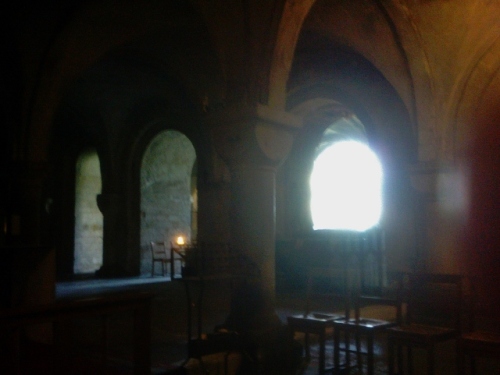 “Do not go gentle into that good night”.

As I slipped into the dark crypt of Canterbury Cathedral, Dylan Thomas’s poem to his dying father slipped gently into my mind, and there it stayed:

Do not go gentle into that good night,

Old age should burn and rage at close of day;

Rage, rage against the dying of the light.

So this was the prayer I had to sit with.

Note that, as a true Welshman, Dylan writes of a ‘good’ night; knowing that at nightfall a Welsh parent might sing ‘Ar hyd y nos’:

All through the night.

All through the night.

Dylan himself had an angelic First Voice Under Milk Wood, watching over Laregub, his ideal corner of the Principality of Heaven; now though he was facing the death of his atheistic father, and with mixed feelings. Should an atheist, could an atheist, accept death without a burning rage?

The prophet Simeon’s ‘Now thou dost dismiss thy servant, O Lord, according to thy word in peace,’ (Luke 2:29) was uttered when the old man saw the true light come into the world (Luke 2:31; John 1:1-14). But what did Dylan’s dad see at the end? Did his light die?

Jesus went out into the night of Maundy Thursday, well aware of the dangers facing him. He did not rage, he went gently, but even so by way of intense emotional and spiritual wrangling with himself and his Father. And an angel did attend him (Luke 22:43).

The angels were to be seen once more on Easter Sunday morning (Luke 24:4) testifying to the Light reborn.

The peace of the Prince of Peace was not lightly won, but it is freely given. (John 14:27) Let us pray that Dylan and his father were able to receive it at last. And let us be grateful for the peace that the world cannot give, but that we can indeed receive from the one who calls us his friends. (John 14:27; 15:14-15).