7 June: Year of Mercy: the Divine Mercy, is a GIVEN. 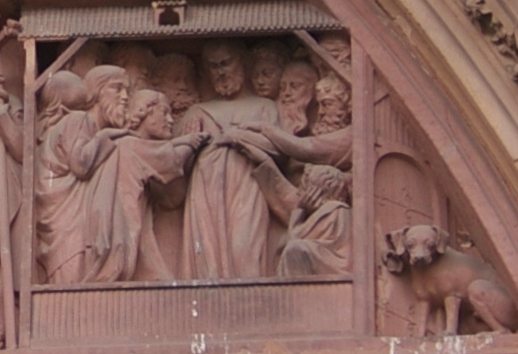 God is love. The unconditional love of God, the Divine Mercy, is a GIVEN. It is always available. The one unforgivable sin is to think that our sin is too great for the mercy of God. As we see during Holy Week this was the sin of Judas: not that he betrayed Jesus for 30 pieces of silver but that he denied the Divine Mercy. He thought that his sin was too great to be forgiven. He could have been forgiven just as Simon Peter was forgiven.

Mary Magdalene, with her pot of ointment, meets the Lord on Easter Morning. York Minster.

See the lesson in this piece of verse – author unknown [to me].

St. Peter was a liar

St. Dismas was a thief

and Tom without belief.

but there they are in Heaven

smiling down upon us now

as each wears a tilted halo

on a badly battered brow.

so the sin of all you sinners

for your “wasness” doesn’t matter

if your “isness” really am.

Mercy does not come from the attributes of the God nor from the fruits of philosophical speculation – as the manuals suggested – but solely from the historical self-revelation of God in Jesus. Dogma has difficulty with a compassionate God. As God is total fullness of being – such perfection does not allow for God to suffer! So mercy became pity – God not suffering, but being with his people who do! God has no connection with life as we know it, which is why God has become irrelevant.

The manuals associated mercy with justice – as we know it – you get what you deserve. God rewards the good and punishes the bad – if this wasn’t so how could God be just? The answer often given was God is merciful to those who repent [conditions apply!] – And punishes those who do not. The relationship between justice and mercy divided the Church in the 16th Century. With the dialogue between Catholic and Lutheran in the 20th Century it was realised that God’s justice is God’s mercy. Now, mercy is no longer a Cinderella no way is there a saccharine God, but one who takes wholeness/holiness seriously. Mercy is out of place if it is not social.