October 16: He would have smiled 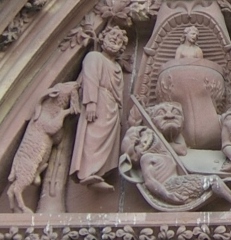 I remember an Anglican priest shaken by a parishioner’s claim never to have suffered, wondering what life this man had lived. R.S. Thomas was an Anglican priest himself of course, and met such men from time to time, perhaps with a wry shake of the head.

The title of this poem, ‘The Fisherman’, evokes images of Peter the Apostle, embarrassing in his stuttering faith. Instead we meet a man who takes a fish or glass of water ‘as though they owed it to him’. How to evangelise such a one?

I could have told of the living water

He would have smiled then,

Dancing his speckled fly in the shallows,

Perhaps this man cannot see the depths of other people and cares only for what he can get from them, dancing the lure of his charm, not realising that he does not understand, not seeing how he hurts them. He would always have smiled. That lesson he’d learnt well.

Judas must have had charm, but he could not understand the loving gift of Mary, anointing the feet of Jesus with precious ointment and wiping them with her hair – even though Jesus had raised her dead brother to life! (John 12) After the death of Jesus, Judas saw clearly his petty betrayals – like stealing from the common purse – as well as the one they led up to. He could not cope with this view of himself.

There is a tradition that when he ‘descended into Hell’, Jesus took the opportunity to save Judas, as expressed by this carving at Strasbourg cathedral, where the Lamb of God is untying him from the tree of suicide.

How to evangelise such a one?