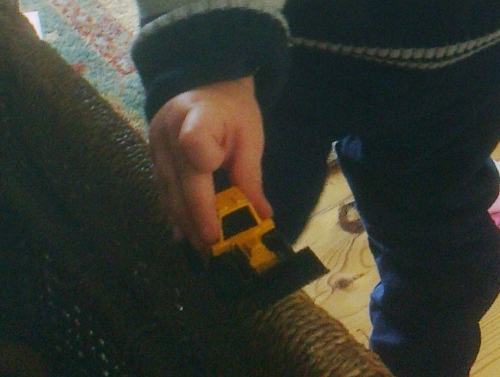 I suggested yesterday that there is something ridiculous – humanly speaking – about the whole Christmas story. But we love stories! Books, TV, films, The Archers on the radio, all have their followers – and their detractors. We learn who we are through stories.

When training as a teacher I reviewed a children’s  picture book about the Rhine,  a few words and some rather good photographs, including the Lorelei Rock. After the story of the sirens luring boats to destruction was told the young reader was asked, Do you think this story is true?

Abel is now eighteen months, a little young to listen to stories, but not too young to tell himself some. Among his words are digger, car, and brrrrm. Enough to start conversations in what some people call the real world, as he points to his Dad’s or his grandmother’s car. Enough to recognise a toy digger as a digger, and push it along, brrrrm. Enough to recognise a cartoon of a car on a tiny sticker given to me by one of his Auntie’s pupils. Is it a true car?

The idea of a car does not depend on size for Abel. Yes, some will dismiss the toy and sticker as unreal. But as Fr Kurzynski suggested yesterday, we are in danger of just not getting it. Small and big may well look different from a divine point of view. Or even from a deeply human one – see our post “A World of my own?” last May 14.

In this life, Jesus started off very small … Be grateful for small mercies.

And let’s pray today for mercy on innocent children suffering in war zones in Congo, Syria and elsewhere.