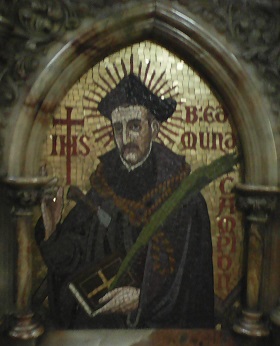 ‘My baby’s called Aubergine’, the little girl told me. I can’t help feeling that Aubergine will stick, even though it is not the one her parents will propose at her Baptism.

Some people are insistent on getting their names spelt and pronounced correctly. I taught one boy who had a soft spot for me because I always spelt his name with a K instead of the C it has in English. I must say I hate it when my name is spelt wrong, especially when people do it in front of me, without asking.

Others just do not feel comfortable with their names.  I was reading of a Spiritan Missionary who prefered to be called Shorty rather than Colman Watkins. He worked in Kenya and helped in Ethiopia when the Catholic Church there was in crisis. Peter was a nickname given to Simon by Jesus.

Another missionary who changed his name was Saint Edmund Campion. He travelled through England incognito during the reign of the first Queen Elizabeth, celebrating Mass for faithful Catholics when to do so was counted treason and liable to the death penalty.

We see him with his martyr’s palm and the rope he was hanged with, and his name in blood red mosaic tiles. Another name appears to the left: IHS – the first three letters of the Holy Name of Jesus in Greek. Biblical shorthand has a long tradition, going back to when parchment or papyrus was not cheap, and it has stayed with us.

Appropriately enough this image is in the Holy Name church in Manchester, run by the Jesuit order to which Edmund Campion belonged. Happy Feast to them!

Not Morris but Maurice!