4 April. Before the Cross XX: Dancing in the blazing fiery furnace. 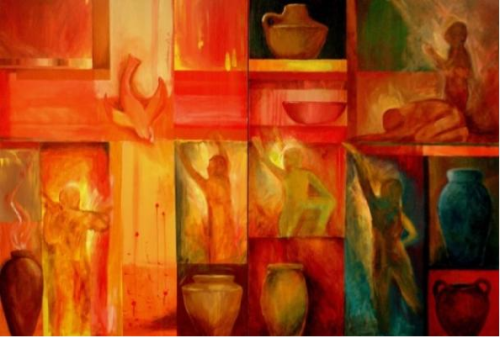 When I first saw this picture that Rupert sent I had not read his reflection but I soon realised that our perceptions, thoughts and intuitions differed but in a creative way. Perhaps my grandson’s baptism attuned me to baptismal themes here. Thank you Rupert, for sharing this arresting image.

It was the dove descending that I first noticed, coming from the fiery light that overflows from the left hand side of the painting. The Spirit seems to be aiming for the water jar, just left of centre. ‘Fill the jars with water’, the Lord commanded at Cana, and the water and the wedding feast were transformed. To reinforce this connection, the jar at the very left has tongues of fire over it, the Spirit hovering over the waters. We are very much in John’s Gospel here: the cross is part of creation! There are six jars, as at Cana, and a basin in which to wash each other’s feet as in John’s account of the Last Supper.

The figures at the top right are in an attitude of adoration, which they express physically, they are not mere armchair Christians. And their attitude, their bowing, is athletic rather than abject. Thus is fear and trembling felt at a moment of great joy.

The three dancers across the middle of the painting are in harmony rather than unison with each other: there are may ways for Christians to be united, after all, but all hear and react to the same music.

The Cross – the blood-spattered Cross as Rupert points out – dominates the space, but is not a symbol of defeat. Rather like an Eschler work, its perspective is more than two dimensional, thrusting out of the frame, And where its shadow would be, were it not a blaze of light, the Light of the World, the undefeated Christ is carrying his banner forward. The dancers have seen him and respond in joy: the fourth person has appeared in the blazing fiery furnace: they are joyful, suffering, people of the light.