13 August, V is for Verulam: hospitality and its unlikely consequences 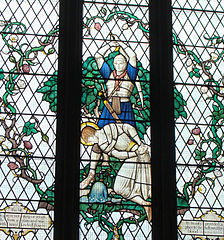 Verulam is the other, old name for Saint Alban’s, a city about 30 km to the north of London. Its Cathedral was founded as an abbey in Norman times, and owes its survival to eventually become a cathedral to the people of the town who bought the building in 1553, following the dissolution of the monasteries.

Verulam, or Verulamium had been a Roman city, with baths, theatres, a market and barracks. Alban lived there in the time of Emperor Diocletian, the great persecutor of Christians. He himself was not a Christian but his lodger Amphibalus was a Christian priest. Alban saw how he lived and prayed and was moving towards his own conversion when the authorities came to arrest his guest. By swapping clothes with Alban, Amphibalus escaped.

Alban, though, was arrested and brought before the magistrate who urged him to sacrifice to the Roman gods by burning a few grains of incense, but he refused and declared to the magistrate that he was a Christian, even though he had not been baptised. He was executed in Amphibalus’ place, the first known martyr of England.

Not so long ago I was talking to a parish priest who said that he had been in his parish for years and not been invited to a meal with a family – then two came for the same evening! We don’t need to fear the treatment Saint Alban received if we invite a priest to our homes, so go ahead and ask them round. Just don’t serve them meat on a Friday!