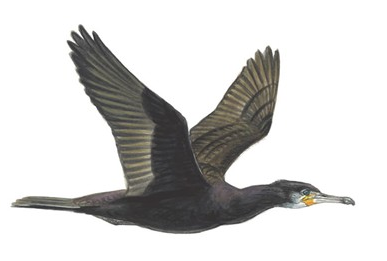 After yesterday’s post from Margate which mentioned the cormorants in Rye, I thought we could borrow one from Will Turnstone’s more private and occasional journal. This was posted in 2017 after a visit to Lambeth Palace Library, in search of Arthur Hughes.

Today I walked from Waterloo to Lambeth beside a river confined by embankments, with light shipping passing by the Palace of Westminster and cyclists, joggers, dog-walkers and tourists in both directions along the path, not all looking where they were going.

One thing I was hoping to see, but only saw when I wasn’t looking for it – a cormorant. Picture this big bird flying past the Houses of Parliament; I watched from the opposite bank.

In my youth anyone falling in the River might have died from poisoning. They even kept my little brother in hospital for observation after he fell into the Serpentine Lake in the park (and I had to go home on the bus in wet clothes after dragging him out).

There must be enough fish in the river to satisfy those greedy cormorants.

When my mother and I visited my 4 year-old brother in hospital on the following Friday he was happy to say goodbye when the time came. Dinner had arrived – fish and chips and it looked really tasty! He’s now a chef and still very fond of fish; and there are even herons along the Serpentine these days.

The citizen scientists of the Royal Society for the Protection of Birds were not least among those who fought and worked to clean up London’s River. Pray that we all may take courage to walk the next steps – and look where we’re going!