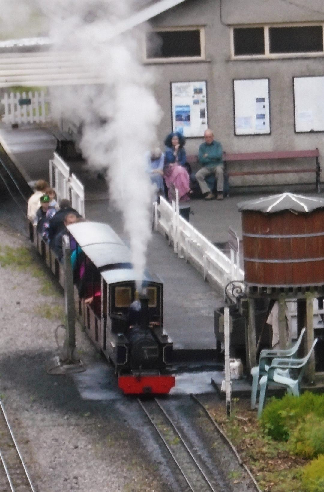 Now four years old, Abel was enchanted when he came to the miniature railway at Bettws-y-coed.* Since he was tiny, unable to walk or speak in words, his fascination with trains has been clear. He would lean in the direction of his local station when being pushed home in his pram, hoping to direct his mother thither.

Full sized trains go places and can be sorted by colour and shape, but they are formidably big. One day a train that grandfather cannot sit upright in turned out to be the right size for Abel. Most of the elements of a railway were in evidence: rails, steam and diesel locos, signals, points, level crossings and bells. Abel felt aggrieved when the signal was red as he passed it, but relaxed when he observed the next light change from green to red as the locomotive pulled the carriages by. I can remember my father explaining this very phenomenon to me on the approach to Birmingham New Street!

Abel was quite right to be concerned. Partly because he likes things to be correct, but also he is aware of the dangers of level crossings and other parts of the railway. His toy trains often crash and rescue services swiftly descend upon the scene.

Despite the inherent dangers, a well-run railway is safe; disciplined staff know their jobs and do them well, thoughtfully rather than mechanically.

A disciplined life is open to the grace that gets us through many dangers, toils and snares, and grace will lead us safely home.  All Aboard!