These last few weeks we may seem to have forgotten and foregone our response to the corona corvid viral pest, but we are still here and safe and healthy. This sighting was worth sharing. We hope you’ve had an excellent summer with plenty of free vitamin D from the sunshine. Happy Autumn; keep safe and keep praying!

The sticker across the shop window read: Don’t forget yourself this Christmas!

Just what did it mean?

Was the mobile phone company advising passers-by to selflessly throw themselves into making the family celebrations enjoyable for all?

Or was it encouraging the great public to remember to buy themselves that expensive 5G mobile phone?

Or maybe suggesting that, like the man in the first photo, over the next few days we should text someone who would like to hear from us?

Or perhaps like Robert Walker, the Scottish anti-slavery campaigner, we should seize the moment to take time out in the fresh air and be one in our thoughts and prayers with our Creator?

If this were a proper questionnaire, it would now say, tick as many boxes as apply (to you!)

Please follow the link to learn more about the Skating Minister who was so much more than a skating minister. 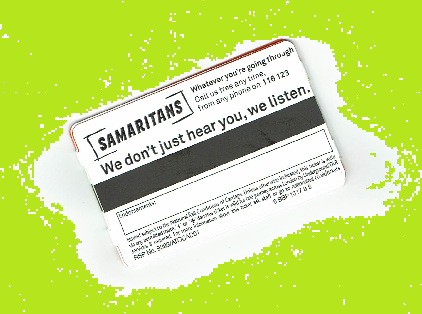 New Year resolutions are all very well, but what if the new year looks bleak? Really hopeless?

I recently came across Tatiana Ketchum’s blog post, ‘If you have a pulse  God has a plan. She tells how she was helped by a sticker that said “There’s purpose in your pain.”

That particular slogan spoke to her at that moment; here is another, on the back of a train ticket. It’s encouraging that the railway companies are still promoting the services of The Samaritans. They listen. On 116 123. And face to face.

And so should we listen, whether it is someone in trouble calling for help, a fellow passenger or a child.

Perhaps especially we should be less lazy, less fearful of listening to children. A young person has every right to adult care and attention, even if it’s only Abel telling his grandmother that he had his nails cut. If they don’t feel listened to as children, it will take tremendous courage to seek a friendly ear later in life.

December 11: Things in the night that monstrous seem

Take far away each hideous dream,

Things in the night that monstrous seem …

Two lines from the compline hymn came to mind when I read about the Christmas TV Ad which shows a boy who has a monster under his bed. Not a lot to do with the real meaning of Christmas, I hear you say.

This monster above has lived in the crypt, or basement of Canterbury Cathedral for many hundreds of years, along with a few more of different kinds, not unlike the imaginary beasts in the margins of ancient manuscripts. This fellow is within sight of Mother Concordia of Minster’s Mary and Child.

Ancient writers imagined the infant Jesus creating living creatures from the mud of the ground. I can imagine him playing with toy monsters and dinosaurs as so many children do today. After all, there were plenty of monsters to be seen among the deities of ancient Egypt where he grew up!

Can we not play, and play fairly, in the world created for us and be grateful? Let’s play fairly by some of our less favoured sisters and brothers this Christmas – we all know several ways of helping. Let’s not be selfish monsters!

Filed under Advent and Christmas, Interruptions

For Jesus, non-violence is at the heart of his message, in which we are called to love – even our enemies. This was so threatening to the Roman and Jewish authorities that they eliminated Jesus, hoping his way would die with him. But the message was more enduring. However, early catechesis missed out on the dynamic power of life fully lived even to death. Missing the significance of life resulted in death being seen as the primary constituent for redemption. This led to the notion of redemptive violence: salvation coming through the cross, by the one made perfect through suffering even to the last drop of blood in obedience.

My desires are in imitation of the desires of others. My “I” depends entirely on those who surround me. If I recognise my dependence on other for my desiring, I will be at peace with this other. But as soon as I insist my desire is original I am in conflict with the other. Someone appears wearing a new fashion; someone I like and admire: I’d like to be like. I buy the same item – others comment on my doing this in imitation I reply yes I like what he’s wearing. However, by far the majority of us would resent the implication – insisting my desire has nothing to do with him. The world of advertising seeks to seduce us by showing someone/thing attractive – if you buy X you can be like Y!

We all desire through the eyes of another. The promising protégé soon experiences alienation from the teacher when the latter fears his standing is being eclipsed by this brighter student – and wonders what has happened – what have I done wrong to merit this reaction? Friends have become rivals.

In an attempt to patch things up we seek for a common scapegoat – this would never have happened if he’d never come here – get rid of him and all will be well again. Having achieved this, we experience a kind of peace – but not real peace. It is peace based on deceit, and the covered-up rivalry will emerge eventually, leading to an eventual exclusion of somebody else, to restore such peace.

In this scenario we have to establish 3 things to maintain peace: 1. forbid all sorts of behaviour that would disturb the peace and lead to conflict; 2. repeat where possible the original exclusion or expulsion, which led to our peace, which consists of ritual actions ending in the immolation of a victim – originally human, later animal; 3. and tell the story of how we were visited by the gods and founded a people – so giving birth to myth.

So, social exclusion is a violent form of protection against violence, made possible by murder – disguised through being ritualised. This universally accepted way is a blind justification of what we are actually doing – cultivating a belief in the guilt of the innocent victim. Cultivating such blindness is the only way to resolve conflict and to avoid social self-destruction [it is good that one person die…].

There is only one way this can be challenged. When someone with an entirely different perception, one not dependent on such a lie, comes to the group and points it out. The Jewish story is a long, slow discovery of the innocence of the victim. Look to the foundation of human culture – Cain and Abel – so too with Romulus and Remus – the two brothers who fight about who is the founder of Rome. They organise a competition to see who has received the blessing of the gods. Remus sees some birds, Romulus sees some more impressive birds. In the fight that ensues Romulus kills Remus and becomes the founder of Rome. Remus was accused of impiety towards the gods and for that reason Romulus was right to kill him.

So too with Cain and Abel [Genesis] – the same thing happens – Cain kills Abel; but there is a difference of interpretation: God says to Cain – where is your brother? A – His blood cries out to me! This declares that the murder is no more than that; a sordid crime, and God is on the side of the victim.