At the annual gathering of the priests of the Hallam Diocese in October 2018 the speaker was Tom O’Loughlin, Professor of Historical Theology at Nottingham University.  Tom gave the priests of the Diocese Six Simple Steps which could go some way to achieving Vatican II’s vision in our celebration of the Eucharist.  Today we take a look at steps 3 and 4. To read the whole article click on the link above.

There is an infamous description of Catholic worship as being impossible to understand but “supported by bells and smells!”  We need to be aware that some things seem to survive in some churches even when they have lost their meaning – and bells are among them.

Step 4:  Provide the cup to all

We must not allow ourselves to forget the command of Christ that we should eat and drink. The command is addressed to us all and not just to priests. (I look forward to the time when this is once again possible, post pandemic.) 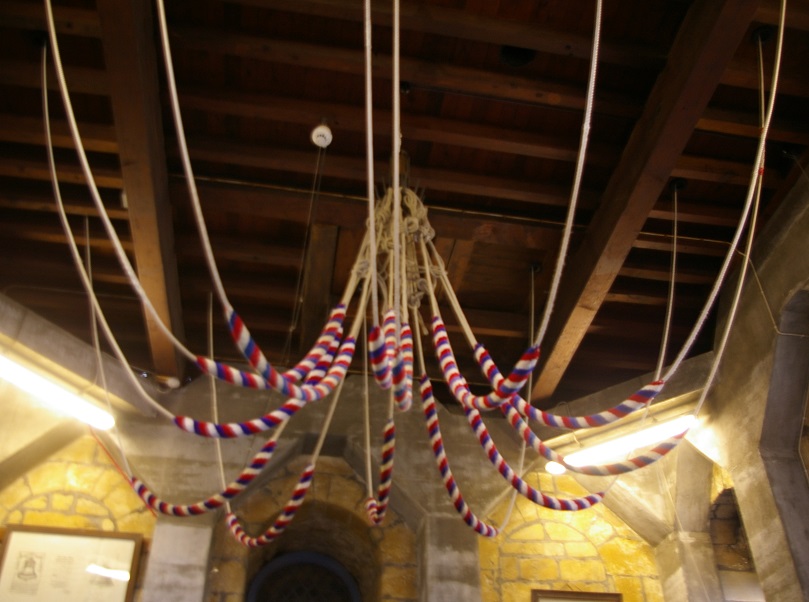 This is an exceptional bell tower: just count those sallies, or ropes, one to each bell. We are in Lincoln Cathedral in England; the bells are high above the ringing chamber so that the sound rings out from the hilltop across the plain below the city. It’s also good for the ringers’ ears not to be too close to the bells.
Here is Elizabeth Barrett Browning* reflecting on hearing the church bell on Easter morning:

“The skies that turned to darkness with thy pain

And on my changèd ear that sabbath bell

Records how Christ is risen.”

EBB certainly knew times of darkness before she won through to earthly happiness with Robert. Her changéd ear is surely one that dares listen for Good News.
Let ours be attuned to the message of the bells. He is risen: even if a number of curmudgeons complain at the bells interrupting their Sunday morning, let them ring out, and let us be seen and heard as Christians who love one another in the risen body of Christ.
Further reflections this week come from members of L’Arche Kent. During our pilgrimage last year, we prayed and reflected on the Emmaus story.
* from The Poetical Works of Elizabeth Barrett Browning, Vol. I.

27 November: When morning gilds the skies. 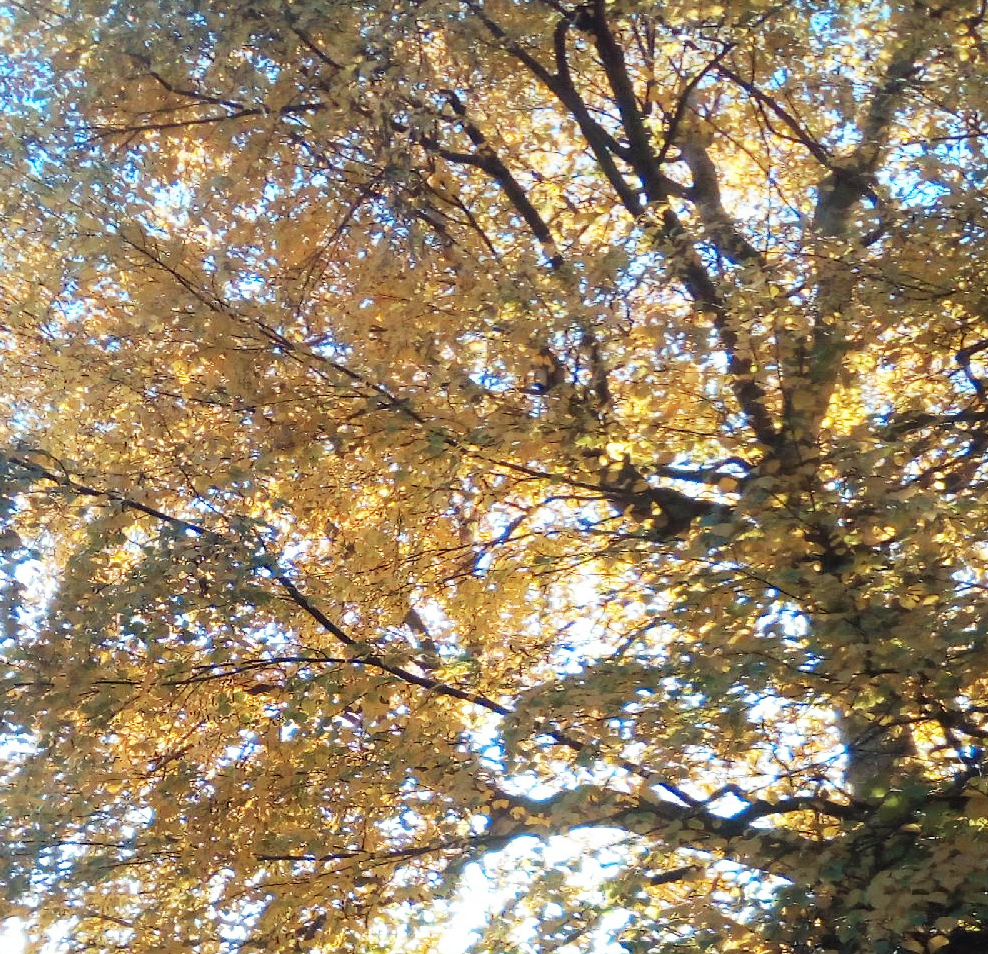 A couple of weeks ago, this was the sight when I opened the curtains. (I had already been downstairs a little while, I’m not always such a late riser!) The golden light, filtered by the birch leaves was lovely indeed, an invitation to get out into the air.

And a call to prayer as vocal in its way as Great Dunstan or Harry, the chief bells of Canterbury Cathedral. I am reminded again of Edward Caswall’s verse which we shared in April:

When morning gilds the skies,
My heart awaking cries:
May Jesus Christ be praised!

I hope you have enjoyed the gilded skies and landscapes of Autumn, if you live in the temperate Northern Hemisphere; may you have peace in your heart and home as you go through Advent and prepare to praise the infant Jesus Christ.

3 August, Pilgrimage to Canterbury : The Bells, the Bells!

Canterbury Bells are a flower in the Campanula family, happy to grow on the chalk, or in this case, on top of an old wall built with soft lime mortar. They are traditionally associated with pilgrimage to Canterbury, growing as they do along the lines of the different Pilgrims’ Way routes making for the shrine of Saint Thomas, including the railway cuttings that were driven through the chalk in the 19th Century.

I should have taken a picture while we were walking our L’Arche pilgrimage but then I should have taken a great many that I didn’t! This silhouette against a grey sky cannot really give us the purple-blue of the flowers, but we can see that the leaves are brown, no doubt due to drought. 2½ metres above the ground is not the most promising habitat when the weather turns dry, but the plants are concentrating their efforts into flowering and seeding themselves.

As we pass by we hear, not Bell Harry or Great Dunstan or the other cathedral bells, but the background roar of the main road. Not a problem for Chaucer’s pilgrims! Nor were they wandering through Kent with earphones blotting out the sounds of the birds, the bells. ‘And I shal clinken yow so mery a belle’, says Chaucer’s Shipman, praising his tale before he tells it.

Mrs Turnstone first heard a cuckoo this year as June was drawing to a close; we heard a nightingale in the woods on one Pilgrim’s Way – in the daytime, but still as lovely. And the blackbirds of Canterbury or London, or even that city of cities, Venice, would be inaudible wearing headphones.

If, as the catechism says, God made us to know him, love him and serve him in this world, we should take each phrase seriously. Out of body experiences are all very well, but Saint Francis, who received them. was also the author of the Canticle of Creation, in which everything created is called to ‘lift up your voice and with us sing, Alleluiah!’ We can only know, love and serve God in this world.

June 5: A windy day in Canterbury. 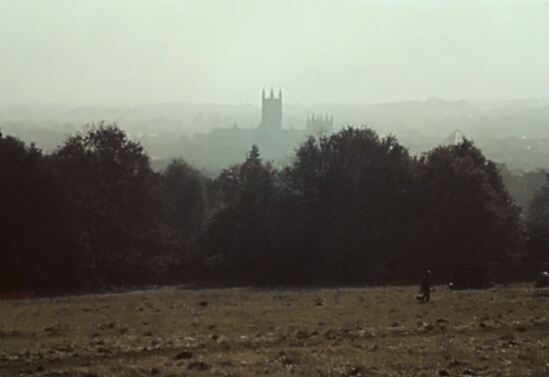 It was a windy day in Canterbury, so windy I did not light up the L’Arche garden incinerator (and who doesn’t like a fire outdoors?).

Home at the end of the morning to hang out the washing: Saint Stephen’s bells are ringing, and a bagpipe playing, blown on the wind which had changed direction so that I had to cycle against it going out and coming in.

Opening the emails, here was part of the day’s reading. Nebuchadnezzar had set up his golden statue:

“Be ready now to fall down and worship the statue I had made,
whenever you hear the sound of the trumpet,
flute, lyre, harp, psaltery, bagpipe,
and all the other musical instruments;
otherwise, you shall be instantly cast into the white-hot furnace;
and who is the God who can deliver you out of my hands?” Daniel 3:4-6

Of course we know what happened: Shadrach, Meshach and Abednego refused to worship the statue, were thrown into the furnace, and were joined by a fourth person,  identified as the angel of the Lord.

I guess the music of the bells and pipes was for a wedding. Let’s hope that the angel of the Lord will be with the couple in all their trials and all their joys. 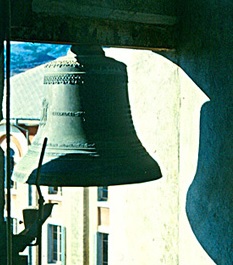 Another of Fr Andrew’s Christmas poems. I’ve chosen the bell picture because of  v 3, and because of Abel, who likes the idea that Canterbury Bells are calling people to Church.

‘Come along, shepherds,’ the Angels cried,
‘Come along, every one!
For great things happen on earth to-night,
And you shall see a wondrous sight –
In bed of straw, on napkin white,
Come down to earth from heaven’s height
God’s own Eternal Son.’

‘Come along, comrades,’ the Shepherds cried,
And quick those men did run,
And in they pressed through the humble door,
And low they knelt on the stable floor,
Where Mary and Joseph, as poor as poor,
In rich contentment did adore
God’s own Eternal Son.

‘Come along, Christians,’ the bells ring out,
‘Ding-a-dong, come along, come along!’
For round the Altar tapers shine,
Where waits our Saviour, yours and mine,
Veiled ‘neath the mystic Bread and Wine,
And every soul should be a shrine
For God’s Eternal Son. 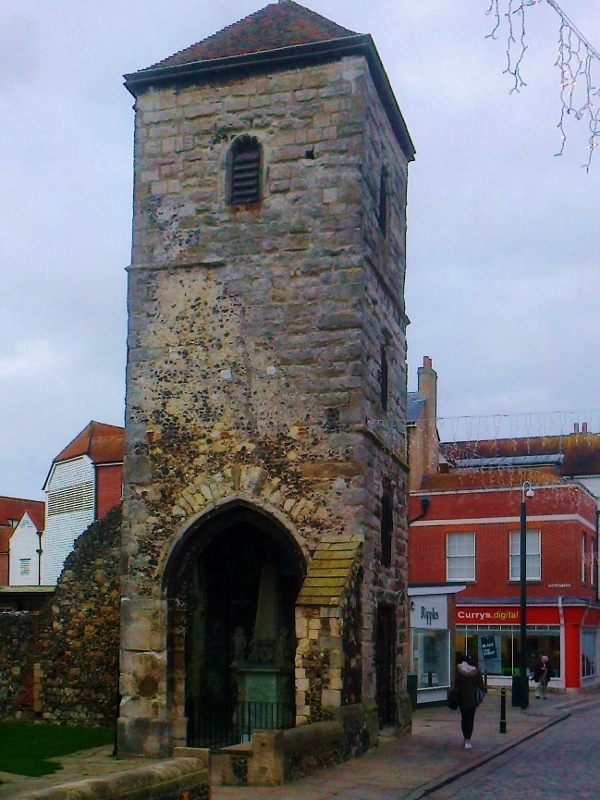 Outside the Church of Saint Thomas in Canterbury stands the dumpy little tower which is all that remains of Saint Mary Magdalene’s church, demolished in 1871.

There were only three bells in the tower and two of them, founded in the fifteenth century, were sent to Madagascar. Madagascar is a poor country, but one that really should be well provided. There is profit for some: licences are being issued to overseas corporations to dig for minerals or grow crops on the island, while Malagasy people endure ever greater poverty and are losing their means of life either in agriculture or tourism; who wants to travel to an unstable country?

Are those bells still calling the faithful after nearly a century and a half in Madagascar and all those years in Canterbury? When you hear church bells tomorrow, pray for the church in Madagascar, and reflect that the rare earth minerals to be found there are needed to make our mobile phones and other modern gadgets; we cannot help being complicit in the oppression of the Malagasy people.

Fruit for the body, wine for the soul: you, Christ, are the true and living Vine.
Stretch your healing leaves across the troubled land of Madagascar,
bringing hope, delight and purpose to all your people there. Amen

Prayer from: US: the United Society for the Gospel. 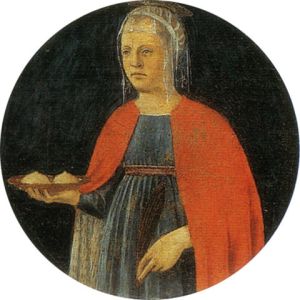 Bringing up daughters in Roman times sounds hair-raising, especially before Constantine allowed Christianity its freedom. The story of Agatha shows why.

She was born in the second city of Sicily, Catania, and died there around AD 250, still a teenager. Although a home-loving girl who may never have left the island, she is mentioned in the Roman Canon, alongside another Sicilian girl martyr, Saint Lucy, who is remembered on December 13th. There seems to have been a thriving Church in Catania even if discrimination and persecution were always possible.

Agatha was recognised as a saint from early times; we know she lived and died a martyr’s death, although some details of her story seem a little fanciful.

We are told that she was very beautiful, and caught the eye of Senator Quintianus who began to stalk her, expecting her to fall for his dubious charms. Agatha was having none of it, and tried to shake the man off, but with a celebrity’s sense of entitlement he pursued her. Finding she was a Christian made him worse. He had her sent to a brothel to change her ways. Agatha remained steadfast, so she was rearrested and tortured; her torments included having her breasts cut off. Agatha still remained steadfast. She died in her prison cell after suffering further indignities. Because bells are shaped rather like breasts, Agatha is the patron of bellfounders and bellringers; there is a Guild of Saint Agatha for Catholic Bellringers: http://www.guildofstagatha.org.uk/

Share a prayer for all who suffer at the hands of the powerful today.