A Cat by Edward Thomas from Last Poems.

She had a name among the children;
But no one loved though someone owned
Her, locked her out of doors at bedtime
And had her kittens duly drowned
In Spring, nevertheless, this cat
Ate blackbirds, thrushes, nightingales,
And birds of bright voice and plume and flight,
As well as scraps from neighbours’ pails.
I loathed and hated her for this;
One speckle on a thrush’s breast
Was worth a million such; and yet
She lived long, till God gave her rest.

This is a war poem insofar as it was written when the poet was waiting to go to war. Edward Thomas was aware that joining the army was a dangerous decision during World War I. Of course, we know he did not come home.

When I arrived at L’Arche’s Glebe garden the day after reading this poem, I met with this sight. There are at least three cats that patrol the place and one young blackbird the less.

We pray that God may give us a changed heart, so that His world may have a rest from War.

5 January: On the way and already there. 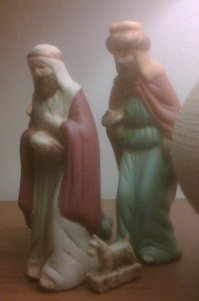 Saint Francis is known for his Christmas Crib, among many other things. All sorts of additions have been made to the Nativity scene since then, often reflecting the way of life around where a crib is set.

Our family crib too has extras for our delight. The West Highland Terrier is a rescue dog; he has attached himself to the Magi on the way to the stable of Bethlehem in our living room, where he was found wedged under the skirting when the floor was sanded and polished.

As for the little black cat who has taken up residence in the stable already, making friends with the gentle cow: she is another foundling. When our daughters were little I would bring home these tiny toy animals, each in its own tiny bag from a tiny shop in Broadstairs; unwrapping them on Friday evening started the weekend. There was delight when this one was unearthed in the garden; she was gone but not forgotten. In gratitude for those happy days, she will sit in the stable for years to come.

We are on the way to meet the Lord, but we may be surprised to see who is ready to greet us when we get there!