Sheila Billingsley has sent us a poem about the great golden cloud that descends on Southern England and elsewhere at this time of year – oilseed rape, a member of the cabbage family and the source of much of the vegetable oil on supermarket and kitchen shelves. It’s actually a staple of our diet, keeps us alive, so deserves a poem of its own.

Ines’s foreshortened view of Canterbury crosses a patch of bright yellow oilseed rape, or colza as the French call it. I don’t know that colza is quite the golden name that Sheila was looking for; it won’t catch on!

The photograph above is by Myrabella, and shows a crop of colza – or oilseed rape – in Burgundy, France.

I had been sitting at the garden table, taking tea with Mrs Turnstone and Grandson No 2, but they had to go to find his parents. I sipped on.

I feel I have short-changed you, dear readers, because the central character in this story does not appear in the feature photograph, but she would have been even more camera shy than Mrs T is, and I was enjoying her company too much to send her packing by pulling out my phone.

She is one of the hen sparrows that nest in the roof of next-door-but-one. The landlord could do with fixing the roof but will have to wait now until the breeding season is over. The sparrow flew down to the table and attacked one side of the sliver of cake; these was a waspy looking creature opposite who probably would have posed for a photo, but Mrs Sparrow is not that bold, so what you get to see is a sliver of cake, slightly ragged at the edges. I got a shared meal with Mrs Sparrow, an uninvited guest.

Not that she sees it that way. As far as she is concerned, we humans are part of God’s providence (Luke 12:6). Food was provided, and food was accepted. She tucked in herself before taking a beakful home. At some point later the cake fell to the floor and was scattered across the flagstones; but it grew too dark for photography, and by the time a tardy human drags himself downstairs tomorrow morning, the crumbs will be gone.

I expect this bird is one of those that help themselves to Mrs Turnstone’s sphagnum moss, leaving her hanging baskets denuded; I daresay, too, she knows about the flowers pecked to ribbons for their sweet petals and nectar. Some things just have to be forgiven.

Other translations have swallow for turtle; turtle being the turtle dove of course. Not as noisy as our local collared doves, I imagine.

Bin liners are a constant plastic we use in our everyday lives, however if we all transitioned to plastic-free or compostable ones we would greatly reduce its impact on nature.

Number 40! Changing your dietary lifestyle can make a huge impact on how much plastic you use. Nut milks mostly come in recyclable cartons and you can purchase your beans and nuts loose from places like unboxed! 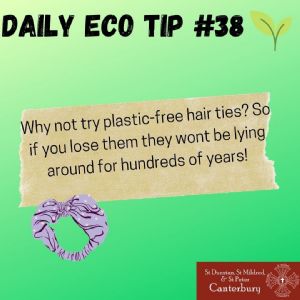 Just because you lost that hair tie doesn’t mean it is gone, it will likely end up in the ocean or a landfill where it would take hundreds of years to break down. Try switching to 100% cotton alternatives to show your support for the environmen 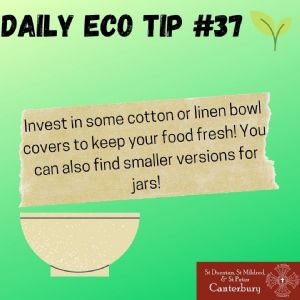 You can keep your foods fresh with plastic-free covers. There are a wide array of beautiful and stunning designs of cotton/linen covers for all shapes and sizes. 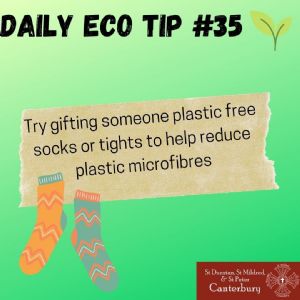 Socks can contain lots of plastic microfibers that shed and can end up in the oceans. There is a growing range of socks that contain no plastics, so why not try out a pair or gift it to someone today? 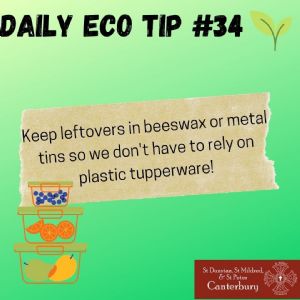 If you find yourself constantly buying new plastic Tupperware, instead try to purchase stainless steel or glass. They don’t stain and are a lot better for the environment as they last a lot longer. 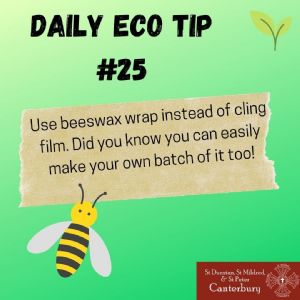 Beeswax wrap is a great alternative to cling film. There are also vegan options available and you can even make your own batch of it. Beeswax wrap can keep your produce and other food fresh but without any plastics. 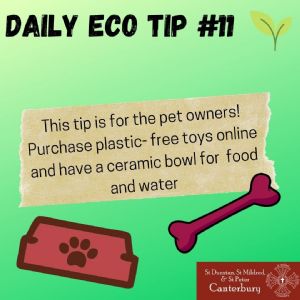 If you are a pet owner, then you know how many plastic toys you go through. So, why not invest in some plastic-free ones? Also, having a ceramic bowl can be a better alternative to a flimsy plastic one.

Whoever would have thought@ 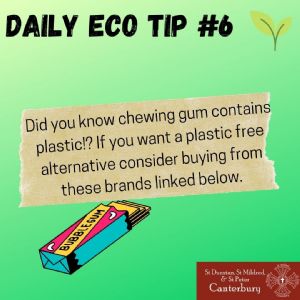 Crazily enough most of our chewing gum contains plastics. The polymer is similar to the ones used in car tyres. So, how about changing to a plastic free stick of gum? Brands such as Chewsy and Truegum are great alternatives to adopt.

Not long ago, we read John Wesley on the argument that slavers were using to justify procuring and abusing slaves: If it is not quite right, yet it must be so; there is an absolute necessity for it. Something along the same lines seems to be put forward to justify almost any environmentally destructive activity. Sin’s arguments are ages old: the Serpent in Eden had Eve believing that the forbidden fruit was absolutely necessary for her future happiness.

I needed a new phone: poor people dig out the scarce ores that are used for the inner workings; others in the manufacturing process are poorly paid, overworked and live in heavily polluted neighbourhoods. It must be so, or must it be so? I have two old phones that should be recycled to reuse precious metals.

Clothes: cotton production diverts water from growing food: ‘it must be so.’ Synthetic fibres cause pollution at every stage of production, use and disposal, even, apparently, poisoning fish in the open ocean. But ‘it must be so’.

Forests are destroyed, ‘it must be so’. Rivers polluted, flood plains built over: it must be so.

Here in Tafa in Northern Nigeria people are farmers and many took time to even accept that the pandemic exists, never mind how dangerous it is for humanity. This is because very few of them have access to TV, they cannot read, write or speak English.

Eventually more awareness campaigns were made through radio and in
collaboration with the local religious and community leaders. Even so, it
was very difficult for people to understand the reason for the closure of
interstate borders, shopping malls, cinemas, restaurants, airports, schools
and offices, cancelling games and vacations, no big gatherings, and closing of the places of worship, and even where people were allowed to go, there were temperature checks and obligatory use of hand sanitizers.
Covid-19 changed the whole atmosphere in our social, economical and religious daily life, provoking anxiety and panic. People were worried as to how they would cope with a disease with no cure. Being a new virus, no one is sure of his or her immunity. Nobody anticipated such an infectious disease nor the deaths which seemed to go on and on. The situation in our markets, parks, institutions and social gatherings caused fear and anxiety. However, people were made to understand how we are to behave even though many things about the pandemic are beyond our control, how long it will last is uncertain, and how other peoples’ behaviour cannot be predicted. God alone knows our communities’ future.
Thank God some people are washing hands, covering their mouths etc.
Both Church and Government are caring for Covid-19 affected families
in different ways. They have shown true love and respect for the poor,
the vulnerable and the sick by distributing food items to cushion their
hardships following lockdown. The foodstuffs such as rice, grains, yam,
vegetable oil, beans, semolina are being distributed. Our own parish is
providing facemasks, buckets for hand washing water, sanitizers, temperature checking machines, and first aid boxes. These efforts are going
a long way to helping people to cope with the Covid-19 situation. We are
doing what we can and for the rest we are in the hands of God.

Fr. Virgilius Kawama MAfr is originally from Zambia. He has published a book ‘A Pastoral Approach to Our Modern Pandemics: HIV Aids and Covid 19.