Sisters have helped the Church in Africa flourish. They are teachers, doctors, nurses, community leaders and much more. Some have been killed for their faith.The Christian Church will always have martyrs, but not all of them will be known about, except very locally to their place of work. Gail DeGeorge, editor of the Global Sisters Report website, tells how GSR are committed to honouring these martyrs. She gives the example of two sisters from South Sudan, shot down a year ago. (Click the link above for the full story.) 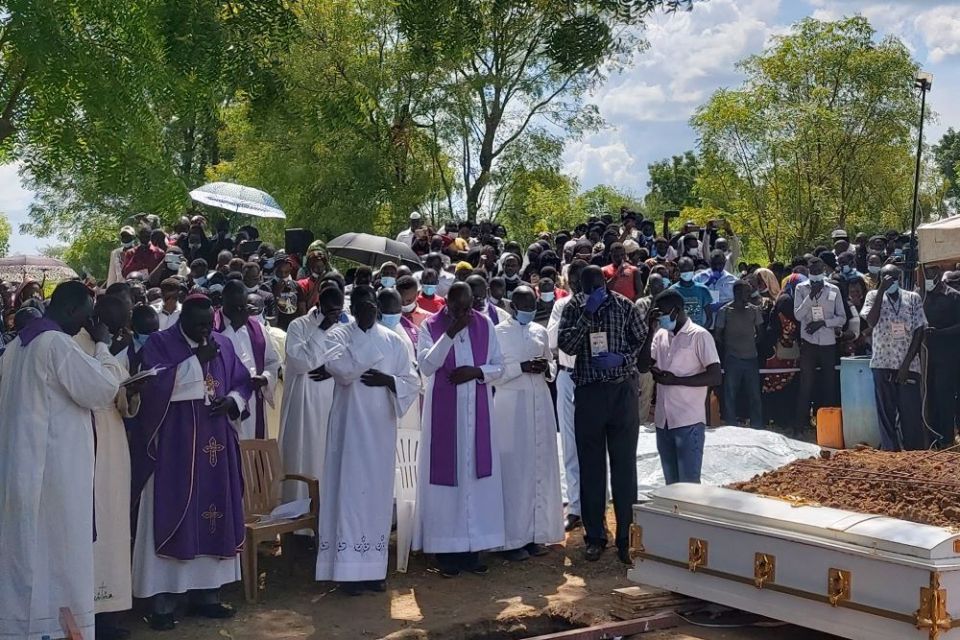 Members of the Archdiocese of Juba, South Sudan, attend the Aug. 20, 2021, burial of Srs. Mary Daniel Abut and Regina Roba, Sisters of the Sacred Heart who were killed when their bus was attacked Aug. 16. (Courtesy of Christy John)

The brutal killing of Srs. Mary Daniel Abut and Regina Luate Roba in South Sudan on Aug. 16, 2021, shook me and so many others. It was an act so blatantly evil it was hard to comprehend.

They had travelled with other Sisters of the Sacred Heart of Jesus to celebrate the 100th anniversary of Our Lady of the Assumption Parish in Loa, where the congregation was founded. As they travelled home the next day, their van was ambushed by armed men who threatened the passengers. Some of the sisters and the male passengers left the van, hoping to divert the assailants and spare other passengers. Abut and Roba were hunted down, shot and killed, along with three other passengers.

Abut was the head teacher of a primary school and Roba, a tutor and administrator at the Catholic Health Training Institute. Both lived out their faith by working to improve the lives of others in the young and troubled nation of South Sudan. No one has been arrested in their killings.

Each year about the feast of Saint Bakhita, we turn our thoughts to those caught up in slave trade, which we know all too well has not gone away.

Gregory XVI was not the most liberal of Popes. He condemned railways as ‘chemins d’enfer’, roads to hell, because they encouraged the rise of the culture of trade and increased the power and influence of the middle classes, upsetting the social order. For all that he followed a number of rprevious popes in recognising that the slave trade was indefensible. His 1839 encyclical ‘In Supremo Apostolatus’ cited Saint Paul to the Ephesians (6:5ff) and Colossians (3:22ff, 4:1) as signs of the early Church demonstrating a new attitude to slavery. Slave and Master were both human, both answerable to one Lord, both to be treated with respect. Gregory’s language is not that of Pope Francis, but sadly, Francis and today’s Church must still address the issues of modern slavery. First Pope Gregory, followed by Sisters in Zambia today, who are working to address these issues.

We have judged that it belonged to Our pastoral solicitude to exert Ourselves to turn away the Faithful from the inhuman slave trade in Negroes and all other men. … Desiring to remove such a shame from all the Christian nations, having fully reflected over the whole question and having taken the advice of many of Our Venerable Brothers the Cardinals, and walking in the footsteps of Our Predecessors, We warn and adjure earnestly in the Lord faithful Christians of every condition that no one in the future dare to use violence against anyone, despoil him of his possessions, reduce to servitude, or lend aid and favour to those who give themselves up to these practices, or exercise that inhuman traffic by which the Blacks, as if they were not men but rather animals, having been brought into servitude, in no matter what way, are, without any distinction, in contempt of the rights of justice and humanity, bought, sold, and devoted sometimes to the hardest labour.

We reprove, then, by virtue of Our Apostolic Authority, all the practices mentioned above as absolutely unworthy of the Christian name. By the same Authority We prohibit and strictly forbid any Ecclesiastic or lay person from presuming to defend as permissible this traffic in Blacks under no matter what pretext or excuse, or from publishing or teaching in any manner whatsoever, in public or privately, opinions contrary to what We have set forth in this Apostolic Letter.

The following photograph is from Global Sisters Report, it introduces an article by Sister Eucharia Madueke about how Sisters in Zambia are organising to combat human trafficking. ‘Open your eyes’ is a call to us as well. Read the full article here.

Sisters from across Zambia attended a workshop in November 2021 in Makeni, Lusaka, on advocacy against human trafficking. The sisters stand with the signs they made as part of their awareness-raising efforts. (Sr. Eucharia Madueke)

Note froom the Editor of Global Sisters Report: In observance of the Feb. 8 feast day of Sr. Josephine Bakhita, the patron saint of human trafficking survivors, which is also the International Day of Prayer and Awareness Against Human Trafficking, Global Sisters Report is publishing two special columns about a workshop held in Zambia by the Africa Faith and Justice Network to raise awareness among sisters about modern-day slavery and train them as advocates against it. (Read the other column here.) This is an example of efforts across the globe that sisters are undertaking to help stop human trafficking. Learn more at Talitha Kum; the U.S. Catholic Sisters Against Human Trafficking, and through Global Sisters Report’s extensive coverage.

21 July: Dancing in the aisles.

A few years ago the Missionaries of Africa came to help celebrate the centenary of our parish school. Every parishioner I spoke to at the time was struck by the reverence shown by the African Missionary students as they danced the book of the Gospels to the lectern to the sound of drums. Other Masses that I have attended with African music and dance were also accessibly prayerful. So I was disappointed to read some of what Sister Freda Ehimuan describes in this article; a mismatch between Christian faith and practice in Africa. She reports that:

She describes one mismatch below:

I urge you to reflect on the article in the light of the recent posts about reforming the liturgy. Not just to ‘tut, tut’ at the missionaries whose predecessors had insufficient understanding of African cultures: they laid the foundations people like Sister Freda can build on today. But also to wonder what a truly local expression of faith would look like in your home town. What would you like to see happening in our celebrations? Read all of Sister Freda’s article here. (from Global Sisters Report, National Catholic Reporter, 12 July 2021.)

Let them praise his name in the dance: let them sing praises unto him with the timbrel and harp.