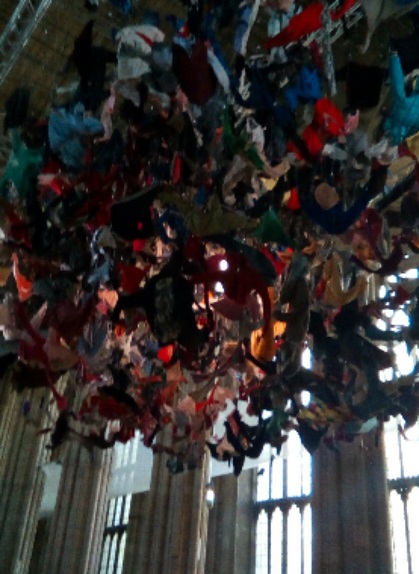 When I went to the Cathedral yesterday I found myself in the nave rather than the crypt. It was still early in the day; the guides and welcomers were just arriving, tidying up their desks and welcoming each other. There were the usual builders’ noises, and someone testing organ pipes: in short, there was the usual silence!

I had time to sit by the font and contemplate the installation ‘Suspended’. The garments hanging above the congregation came from refugees on the Isle of Lesbos or the camps around Calais; clothes they were glad to discard when they were offered a clean change. I hope they found something they liked to wear! Their lives have been suspended between their old homes, destroyed or stolen, and who knows what future.

There the clothes hang, reminding us that these refugees are sisters and brothers of ours, thrown on very hard times, as were others – including perhaps their grandparents – seventy years ago when Pope Pius XII wrote the words we read here yesterday.

Let us follow his call, and pray for peace, and support those who support the refugees.

When we travel, we hope that when the heat gets too much or we feel hungry and thirsty, God’s Providence may bring us a friendly face and a chance of hospitality. But tourism takes us through areas of ruined classical cities, where once was a lively population and hospitality was likely. However, that population died long ago, and all they have left is the skeleton of a dwelling. This picture reminds me of a similar doorway, to a house which no longer existed, when I visited Athens in my late teens, when a military junta ruled Greece.

I had taken a bus from the airport into Athens in the early hours. By five in the morning it was light, and beginning to be warmer. I had planned to visit the Parthenon before the crowds arrived, so I sat down on the step in front of a doorway like this to gather my wits for the climb up the hill. But there was an old wooden door in the doorway, and this suddenly opened behind me. A fellow traveller, an American I think, emerged, wished me good morning and went on his way. He had slept the night behind a door and a door frame.

It was a comical, theatrical moment, as if an ancient Greek house servant had come back to life to greet me.  Like Silas and St. Paul, I was wondering what signs or messengers might show up in my dreams, to send me off on a more purposeful path.

It is Saint Pancras’ feast today. This was the starting point for this group of blogs. His station now is a place of great beauty, cleaned, restored; endowed with new responsibilities in the shape of European, Kentish and cross-London trains.

Before this great labour of love, inspired by Sir John Betjeman whose statue forever admires the station roof, there was a Greek-owned fish and chip shop in one of the arches on the Euston Road. One day I noticed an ikon of Agios Pankras behind the counter, and pleased the server by reading the title aloud.

As exiles they must have felt close to Pancras, a Greek immigrant to Rome, a teenager caught up in the persecutions, like next month’s martyrs of Uganda. Without wishing martyrdom on any of them, we underestimate our young people and what they could do when challenged. We should recognise that they are fully alive already, and indeed prepared for life’s challenges, so they should be endowed with new responsibilities. Pancras was a martyr at 14, my parents were earning their living at 14. I taught catechism at that age, I took my turn as MC at Mass.

We risk prolonging immaturity and alienation when we extend compulsory education to what must seem like infinity to non-academically minded young people.

At least the Church could offer them a few responsible voluntary ministries, couldn’t it; couldn’t we? And who knows where will they go on to, after helping at our station for a while?