William Allingham is in the New Forest at Lymington, a small port opposite the Isle of Wight, where he is a senior customs officer. He recorded in his diary on this day in 1868.

Thursday, October 22. — Lymington. Walk to Setley, and find gypsies encamped. Coming back I overtake a little girl carrying with difficulty two bags of sand, and just as I am asking how far she is going, up drives Rev. P. F. in his gig, who offers me a lift. I say, ‘ Help this little girl with her two heavy bags,’ upon which his Reverence reddens and drives off. I carry one of the bags.

Where to start? Of course in 2022 we could be screened from the realities of life for a poor child because we would drive past in a sealed car, and not notice a thing. And we can insulate ourselves in other ways too.

Gilbert White, Anglican curate of Selborne, Hampshire, and pioneer naturalist, is writing to his friend, Thomas Pennant, reflecting on his studies and writing. Enjoy the XVIII Century prose, but reflect: what observations should I be sharing that might induce any of my readers to pay a more ready attention to the wonders of the Creation, too frequently overlooked as common occurrences? Dip your (metaphorical) pen!

If the writer should at all appear to have induced any of his readers to pay a more ready attention to the wonders of the Creation, too frequently overlooked as common occurrences; or if he should by any means, through his researches, have lent an helping hand towards the enlargement of the boundaries of historical and topographical knowledge; or if he should have thrown some small light upon ancient customs and manners, and especially on those that were monastic, his purpose will be fully answered. But if he should not have been successful in any of these his intentions, yet there remains this consolation behind—that these his pursuits, by keeping the body and mind employed, have, under Providence, contributed to much health and cheerfulness of spirits, even to old age:—and, what still adds to his happiness, have led him to the knowledge of a circle of gentlemen whose intelligent communications, as they have afforded him much pleasing information, so, could he flatter himself with a continuation of them, would they ever be deemed a matter of singular satisfaction and improvement.

THE NATURAL HISTORY OF SELBORNE: LETTERS to THOMAS PENNANT, ESQ.

from “The Natural History of Selborne” by Gilbert White)

Here is the second of John Hodgson’s posts on Gilbert White from the John Rylands Library, University of Manchester. With links to the Gilbert White’s House museum in Selborne. 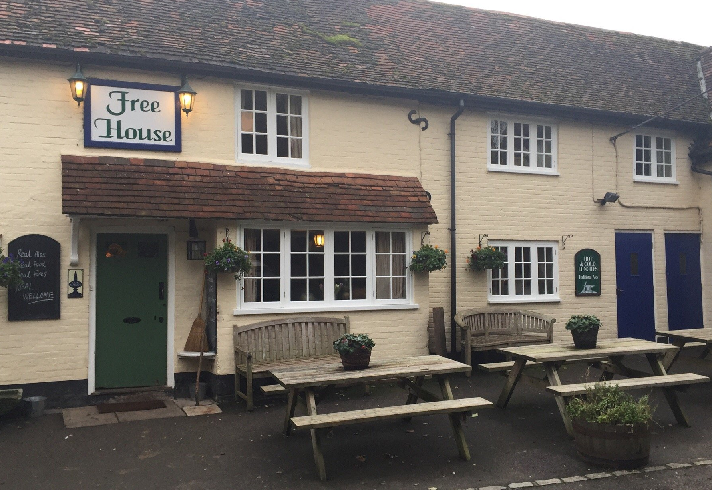 May 30: P is for Portsmouth and car Parks

This shows the Southsea end of Portsmouth from the Isle of Wight Ferry. I went to school behind those trees.

Genteel Southsea rather held its skirts away from the main city, I felt, a city that had not recovered from the Second World War and the subsequent reduction in British sea power. Once, on the way to the ferry, I took my family to sea the ugliest building in Britain, the brutalist Tricorn car park, a favourite suicide spot. Our big car park in Canterbury was not so ugly, except that it too attracted would-be suicides. Whatever the buildings’ style, they were places of great sadness; we are better off without them.

Of course getting rid of multi-storey car parks cannot take away people’s distress. But sometimes it falls to us to help, even if just to be there with them.

The rest of this post is from the Samaritans’ website. Worth reading for the odd moment when something feels not quite right.

How you can help

Suicidal feelings can be overwhelming, but they will pass.

How someone behaves in this brief window is as unique as the individual themselves. But there are signs you can look out for.

Signs someone may need help

Someone looking out of place or a feeling that ‘something isn’t quite right’. If you feel that way about someone, trust your instincts and try to help.

Approaching someone in need

We know that when a person is suicidal having someone to talk to them and listen to them, and showing that they are not alone, can encourage them to seek support. There is no evidence that talking to someone who could be at risk will ‘make things worse’.

A little small talk can be all it takes to interrupt someone’s suicidal thoughts and help start them on a journey to recovery. If you think that someone might need help, trust your instincts and strike up a conversation, with a comment about the weather for example. Life-saving questions used by rail staff to help people have included:

So strike up a conversation if you feel comfortable and it’s safe to do so. Or tell a member of staff or call 999. Your involvement could help save someone’s live.

What you can do if the person needs further help

If you sense the person might need help after your initial approach, then you could ask directly if they’re ok.

You could introduce yourself and encourage them to talk if you can, and listen. You could then offer to take them to a safer environment where you’re able to get them the right support.

Tell a member of railway staff as soon as you can, or call 999.

We do not recommend you make any kind of physical contact. If the situation is an emergency, eg the person in on the track, tell station staff or call 999 immediately. Do not go onto the railway line under any circumstances.

Interventions make a huge and positive difference. It can be emotional and if you feel you would like some support after making an intervention or would like to talk to someone about it, you can speak to Samaritans by calling 116 123. 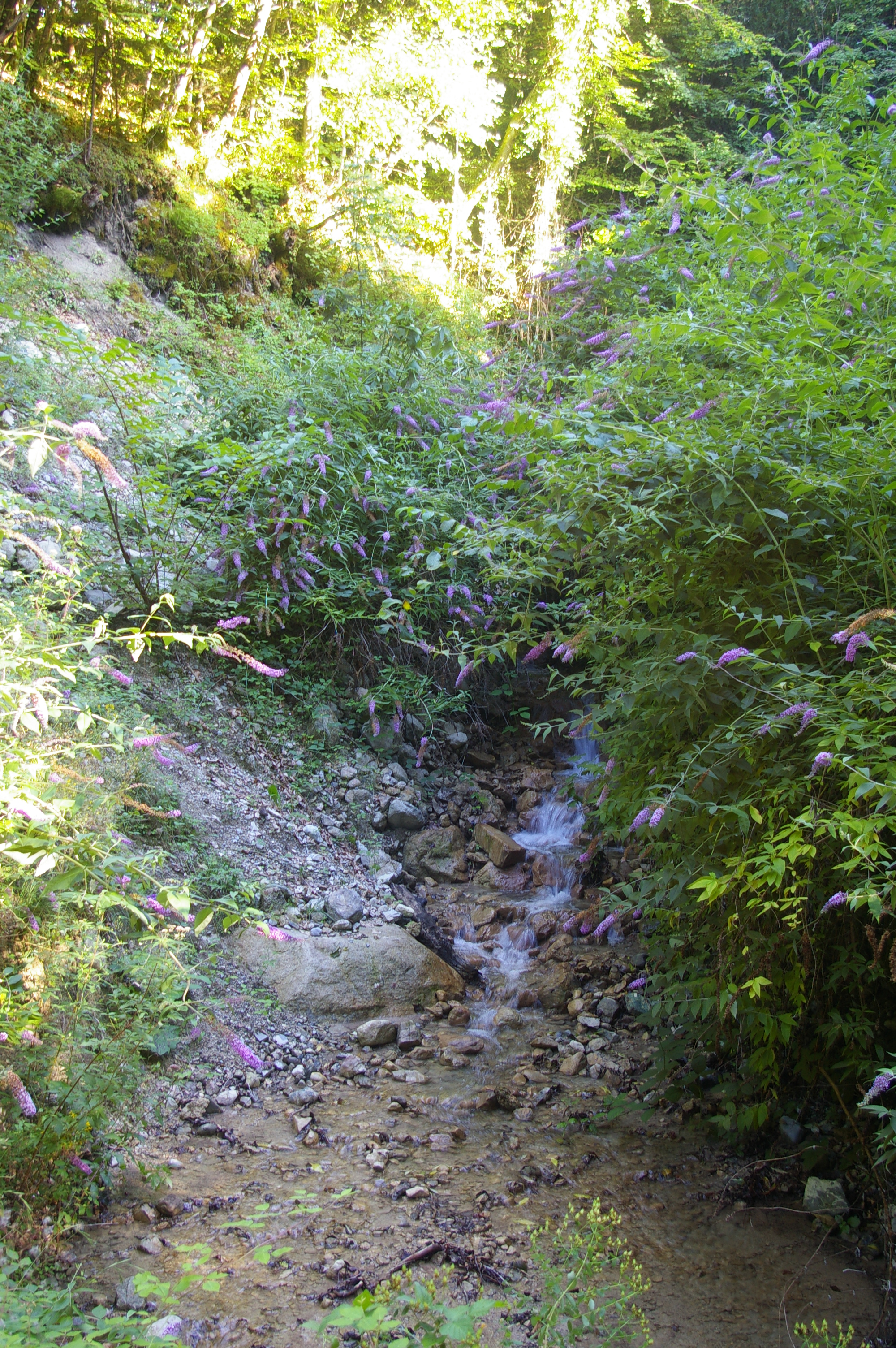 Neither Scottish burn nor chalk stream, but a brook in the way, roll-rocking down a Polish Mountain.

He shall drink of the brook in the way: therefore shall he lift up the head. Psalm 110.7

I was reading a letter written ninety years ago by Fr Arthur Hughes, MAfr, later an Archbishop. He told his sister how he regretted that rain and subsequent Hampshire mud meant he would not be able to go down to a brook near Botley and there, as was his custom, drink, citing Psalm 110.

Then, on the train home I read an advertisement for an urban survival course; readers might feel confident they could find water in the wild, but after a disaster, could they find water in the city? Hughes had a reputation for finding fun in the Scriptures – by my reading drinking from the brook was a concrete prayer, laughing at himself in the process.

Hopkins’ poem Inversnaid, describing a brook very different to the clear waters of Hampshire, is a prayer without the name of God being mentioned. Is the beadbonny ash  perhaps the rowan  or mountain ash? (This one grows beside Canterbury’s chalk river, the Stour.) 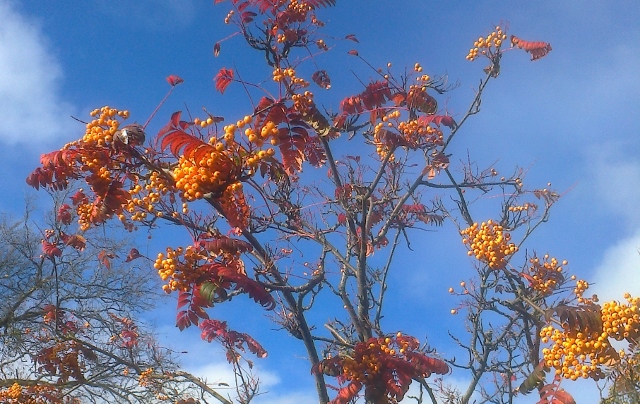 His rollrock highroad roaring down,

In coop and in comb the fleece of his foam

Flutes and low to the lake falls home.

Turns and twindles over the broth

Of a pool so pitchblack, féll-frówning,

It rounds and rounds Despair to drowning.

Are the groins of the braes that the brook treads through

And the beadbonny ash that sits over the burn.

What would the world be, once bereft

Of wet and of wildness? Let them be left,

O let them be left, wildness and wet,

Long live the weeds and the wilderness yet.