On the Thursday of Holy Week, known as Maundy Thursday, it is traditional for the reigning monarch to distribute money to deserving pensioners in a cathedral somewhere in the United Kingdom. This year, the chosen cathedral is, once again, Canterbury Cathedral, now that the Queen has distributed the Maundy coins all around the country in every cathedral. She commanded that the ceremony should take place in London only once in every ten years.

The word ‘Maundy’ comes from the Latin for ‘command’, mandatum. The Thursday before Easter Day has been a traditional observation from early Christian days in celebration of Jesus Christ’s command to “love one another” demonstrated by his washing of the disciples feet. The day marks the end of Lent, an old English word for ‘lengthen’ as the daylight increases, a period of forgiveness, prayer, reflection and study.

The Queen honours the number of ladies and gentlemen for each year of her age. In 2021 this is 95, a total of 190 recipients.

Each recipient is given two purses, white and red. In the red one is a set amount of current coinage amounting to £5.50, historically representing alms, made up of £3 for clothing, £1.50 in lieu of provisions and £1 which represents a piece of the Sovereign’s gown which, before Tudor times, used to be divided between the recipients.

The white purse contains specially minted sterling silver coins in one penny, two pence, three pence and four pence denominations related to the age of the monarch. In 2021, a total of 38 coins. The style of the coins is largely unchanged since 1670 when Charles II added a year date to the coin distribution he started in 1662. The picture of the Queen on these coins is her 1953 Coronation year portrait designed by Mary Gillick. The coins were only ever debased from sterling silver by Henry VIII from 1544 to 1551. The design for the reverse of the Maundy money is a crowned numeral in a wreath of oak leaves. This has been the same design since Charles II.

As Her Majesty is unable to distribute the Maundy money in person in 2021, for the second year running, because of the coronavirus pandemic, each set will be sent from Buckingham Palace, having been blessed in the Chapel Royal, St James’s Palace, with a personal letter from the Queen.

In our Benefice, one of our Readers, John Morrison, has been informed by the Lord High Almoner that he has been selected to receive the honour of this year’s Royal Maundy during Holy Week. John is active in the Church of England as a national Peer Reviewer and is on the Provincial Clergy Discipline Panel. In the Diocese he is an Archdeaconry of Canterbury lay representative on the Archbishop’s Council, a member of the Diocesan Synod, the Canterbury Deanery Treasurer and is an active licensed lay minister (Reader) in this Benefice. He is also a Chaplain in the Sea Cadet Corps.
John, this is a wonderful achievement, and congratulations from us all for this well-deserved honour, and for your ministry amongst us.

Here’s a link to Mission Today for Spring 2021.

You can keep up-to-date with stories from missionaries on the ground, and find practical ways to get involved in mission in your own community.

There are some excellent articles – well worth reading.

Going Viral LXXV: Give thanks for your vaccination

More from Rev. Jo at Saint Mildred’s in Canterbury.

Good morning to you all on this beautiful spring day….

As probably the majority have now had their first vaccination, if not their second one, The church of England are working with Vacinaid and we are encouraged to read the following: ref: https://www.churchofengland.org/resources/coronavirus-covid-19-guidance#na

If you want to give thanks for receiving your vaccination, or to donate to charities who are helping to ensure that every community is supported, the following suggestions are among ways this can be done:

21 March: A modern parable for Lent.

We invite you to share this seafaring reflection from the Dean of Lichfield, a city about as far as you can get from the sea in England! He ends with these words:

Lent is a good time for self-examination on a personal and communal level.  How far have I or we mangled God’s image and likeness into my/our own limited image and likeness?  How far have my/our anxious needs for safety, belonging, esteem, or amounting to something deafened or blinded me/us to what God is putting before us?  And remember Christianity is a “revealed” faith, so it’s not so much a question of inventing the God we want, as understanding the God we have got and are getting.

Let’s journey on this Lent, personally and corporately, towards what God holds before us.  We can do no better than read and meditate on one of the Gospels – try Mark.  It’s short and punchy and lets us know why that, when the Good News is proclaimed, life isn’t settled or comfortable.

A prayer for us to say together:

We thank you, Lord Jesus Christ, King of Glory, that you have called us to be your people.  Help us to know the greatness of our calling, so that we, having one spirit of faith and love, may live in the world as a new and holy generation.  May your eternal and righteous will be always before our eyes, so that in soberness and vigilance we may await your time, and witness to your promises, until your kingdom comes.  Amen.

With my love, prayers and blessings

I think we’ve caught up with ourselves again. 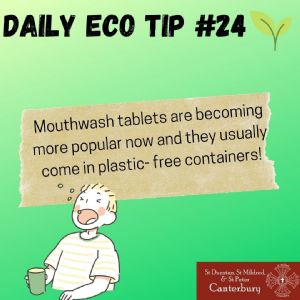 Invest in mouthwash tablets and store them in a plastic-free container. You can also purchase refill packs that come in compostable packaging. Just dissolve the tablets in some water and gargle. 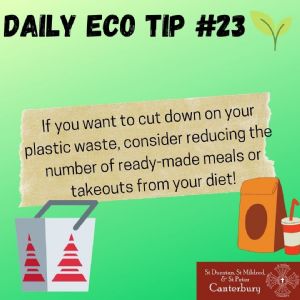 Reducing the amount of takeaways you have monthly will not only help your diet but also reduce the amount of plastic waste. If you want some alternatives you can look for new tasty recipes you haven’t tried before. Or try some recipes that taste exactly like your local takeaway spot.

16 March: All ye that enter in at these gates. Gates V.

The word that came to Jeremias from the Lord, saying: Stand in the gate of the house of the Lord, and proclaim there this word, and say: Hear ye the word of the Lord, all ye men of Juda, that enter in at these gates, to adore the Lord.

To steal, to murder, to commit adultery, to swear falsely, to offer to Baalim, and to go after strange gods, which you know not. And you have come, and stood before me in this house, in which my name is called upon, and have said: We are delivered, because we have done all these abominations. Is this house then, in which my name hath been called upon, in your eyes become a den of robbers? I, I am he: I have seen it, saith the Lord.

If Jeremiah was preaching at a gateway like this, he would get noticed; even if other preachers were getting pushed to the side by impatient passers-by.

Occasionally there are preachers around Canterbury Cathedral’s main Christ Church gate: mostly they seem to be ignored, as the churches themselves are much of the time. People say I’m too nice to them if I stop and chat, or engage with the Jehovah’s Witnesses.

Someone Else called the Temple a den of robbers, and drove the moneychangers out of the courtyard. They were no doubt raking in a tidy profit, in effect making Mammon, or money, at home in God’s House; going after strange gods, as we are tempted to do today. We may not be directly sacrificing children to Baal or to Mammon but there are many children whose all-but slave labour contributes to our comfortable lifestyle. Think of clothes and shoes made in Asian countries.

Willy-nilly we are caught in a web of sinfulness and can do little to escape it. At least there are some fair trade products on the market that we can buy, and we can hope that the shops we use do indeed check all the way back along the supply chain to see that workers are treated fairly.

I think we are catching up with the proper timetable for these tips!

Instead of buying a new phone or product, why not do some research and look for second-hand versions! Sometimes a small beauty defect like a scratch can knock off hundreds of pounds! Communities such as Facebook Marketplace and Ebay are thriving with products that are basically new or slightly used for a fraction of the original price!

While I was away from the L’Arche garden in Canterbury, a few other volunteers descended on the place and made preparations for when people could come back to work, socially distanced of course. I’ve been back for a few weeks now, largely working 1:1 with me and my shadow, but sometimes socially distanced with Mr N.

We found the tool rack when we got back; there’s another one behind it. Thank you Mr B. These will save us so much time, provided of course, that everyone uses them. The tools will be accessible and visible, no hunting and heaving, not knowing if we even have a particular tool.

So perhaps a little organisation in other areas of life this Lent? I’ll say no more as Mrs T will be muttering about ‘do as I say but not as I do.’

We get a lot of unneeded paper mail at our door, ranging from promotions to bank statements. So, how about changing all paper mail to virtual ones instead! Most banks do this and over the course of a year you might be saving stacks of paper that would have otherwise gone to the bin!

Did you know that of the 39,000 capsules produced worldwide every minute, 29,000 end up in landfills. Only you can help reduce that number through using a french press! They don’t require a filter and the grounds are fully compostable. Also, aim to buy fairtrade coffee beans as they can sometimes come in plastic-free packaging!

I have to admit that I did not recognise this name, ‘French Press’. But it seems to be the good old cafetiere (as below) that Mrs T invested in years ago. It does make good, fair trade coffee! And it’s much simpler than machines and pods. The ads with these posts seem to have arrived with the links to the posts.