1 February, Going viral XCIX: Trying to be as careful as possible.

Careful or care-full? We share this thought provoking story from Plough magazine.

When Masking and Vaxxing Threaten a Friendship

It was she, member of the resistance against both masks and vaccines, who showed me, the vaccinated mask-wearer, how we bridge the rift.

13 June: Today this is my vocation I

Sister Johanna’s reflection yesterday reminds me of the time when, talking to Philippe, a Missionary of Africa, I described my work with children and teenagers who were excluded from school. His response was, ‘First of all, you have to love them.’

Talking to my colleagues over the years, I came to realise how true this was of all of them, though they would more likely have spoken about ‘getting alongside’ the young people and their families; loving is not a recognised professional activity. Yet some tutors kept a supply of children’s clothes and shoes, either for their pupil or a sibling; I’ve known outgrown bikes and beds to be supplied by tutors, while home-made cakes and preserves showed that we cared without ‘giving charity’.

All this contributed to establishing trust between families on the margin and professional teachers; a trust that could not be taken for granted. The young people and their parents were often Sister Johanna’s

so-called “sinners” … people who were thought to be involved in all sorts of iniquitous practices, whose entire life-style was considered morally dubious at best. I daresay that then as now, there were people relegated to this group who were essentially honest but had fallen on very hard times, people for whom earning a living had proved impossible, and for reasons beyond their control. But many will have been truly as dishonest and even criminal as they were thought to be, and all were deeply wounded people for one reason or another. This is a crowd of seeming failures – if you judge success by the sleek appearance of it. And this is something Jesus never did.

I would not have you see my families as stained glass saints, far from it: in many cases they really were dishonest and criminal, and not necessarily skilled crooks, so they tended to get caught. One father was later murdered by a drug dealer; a dear boy was murdered by his stepfather; assault and theft were not uncommon. More than once I was warned not to visit alone, but then the question ‘What would Jesus do?’ was easy to answer: this is my job today and today this is my vocation.

‘That’s not what your children say, is it?’

Her children did not judge her by appearances. Part of my job, my vocation, one of the parts not mentioned in any job description, was to vindicate her children by helping that mother find the good mother in her heart. Perhaps we should dare to remove the masks and let Jesus breathe on us, then take his healing grace to the battered souls crowding around us.

I was gathering the last few items for the Easter gardens when this pot caught my eye in the toolshed. Another symbol for the garden, Mary Magdalene’s pot of ointment for Jesus’s burial! I remembered this picture from York Minster, where her pot is shown in a golden yellow. She has put it down on the grass, and doesn’t seem to know where to put her hands. Maybe Jesus has just said, ‘Don’t touch me’, when that is what she really wants to do more than anything.

But look! He is reaching out to touch her. He has disguised himself as the gardener so as to let the revelation of his return come gently to her.

What neighbourly mask or disguise will he be wearing today to lead me gently to see him?

We revisit this scene tomorrow.

and lo, I am with you always, even to the end of the age.” Amen. 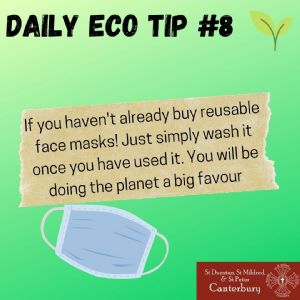 We are using masks on a daily basis, so why not help the planet with reusable ones. All you have to do is give it a good wash and voila, good as new!

Yesterday, Tim; today his mother, Sheila, brings a poet’s eye to the face mask and what it might teach us, now and when we can discard them (and please, not on the street!) Thank you again, Sheila for your artist’s wisdom.