Bishop Rose Hudson-Wilkin, Bishop of Dover, Dr Ulrich Schmiedel of the University of Edinburgh and Rev Dr Keith Clements will be speaking at an online conference this coming Saturday, addressing the question of what should be the Christian response to those who seek asylum and refuge in our country, and asking what insights can be derived from the work of Dietrich Bonhoeffer.

Contributions will also be invited from groups currently working on the ground to meet the needs of asylum seekers and refugees in Calais, Kent, and the North of England.

This free conference: Faith and Frontiers: Christian responses to the migration crisis takes place on Saturday 17 September 10am – 4pm.

To book a place see: www.projectbonhoeffer.org.uk/events/

Filed under Interruptions, Justice and Peace

About the time the Quakers were migrating to North America, many other people were doing the same, in the case of Hebridean Islanders, it was poverty in the aftermath of the 1745 civil war that drove them away. Dr Johnson and James Boswell visited the Isle of Skye in 1773, soon after the process started; they were made welcome, but part of the entertainment was a sobering reminder of this. Here is Boswell (with his sometimes antique spellings):

In the evening the company danced as usual. We performed, with much activity, a dance which, I suppose, the emigration from Sky has occasioned. They call it America. Each of the couples, after the common involutions and evolutions, successively whirls round in a circle, till all are in motion; and the dance seems intended to shew how emigration catches, till a whole neighbourhood is set afloat.

Mrs. M’Kinnon told me, that last year when a ship sailed from Portree for America, the people on shore were almost distracted when they saw their relations go off, they lay down on the ground, tumbled, and tore the grass with their teeth. This year there was not a tear shed. The people on shore seemed to think that they would soon follow. This indifference is a mortal sign for the country.

From “Life of Johnson, Volume 5, by James Boswell, via Kindle.

And a mortal sign for any country today whose more enterprising citizens feel the need to leave all they have known for a perilous journey to a land where they may not be as welcome as they might hope. War still drives people from their homes.

Let’s pray for peace in our time and for the casualties of war.

23 July: Faith in the city and the New World

We met the Shakers briefly when we were reflecting on Vocation in daily life, in particular the life and work of women in this 18th and 19th Century American community. But they started off in Manchester, about 1747. Faith in the city!

The shakers were influenced by the Quakers, they had been known as the Shaking Quakers, and a leader emerged in the person of Ann Lee, the illiterate daughter of a blacksmith. She was however a person of great spiritual intelligence, as well as the desire to know God and carry out his will. Her devotion led her group to accept her as a second embodiment of Christ, and she was known to them as Mother Ann.

There was still a great intolerance of religious dissenters in England at the time, which led to her leading a small band of Shakers to North America in 1774 to restore the Apostolic Church there. This was at the start of the American Revolution, and they were treated as spies for the British government and thrown into prison. After their release they set about establishing the Kingdom of God, and war-weary Americans began to join the movement, and the Shakers made room for them all. Communities of Believers in Christ’s Second Coming were thus established in rural areas, trying to live by the law of love, but celibate, as Jesus had been. A far cry from the mills of Manchester’s Industrial Revolution.

6 July: A wall intersects the promise of the unknown.

A photo essay about the Mexico-US border and the people trying to cross it.

Lisa Elmaleh took her antique, large-frame camera with her when she volunteered with the Sisters helping Latin America migrants along ex-president Trump’s border wall. This photo-essay, with words by Soli Salgado tells some of the stories they encountered. It comes from Global Sisters’ Report. Click on the link and read on: it is a sobering report.

Swallows returning to their nests

Swallows were being discussed on the radio this morning, but no, we have not yet seen any around here, though we’ve had blackcaps and willow warblers among the UK’s migrants. This photograph of swallows’ nests was taken a few years ago at Brant Brougham near Lincoln at snowdrop time, so these were the previous year’s nests which might well have been repaired and reused a couple of months later.

It’s rather delightful that they should have built against the roof boss of the pelican on her nest. And the picture brings to mind the famous verse from the Psalms:

Yea, the sparrow hath found an house, and the swallow a nest for herself, where she may lay her young, even thine altars, O LORD of hosts, my King, and my God. Psalm 84.3

As to the short-winged, soft-billed birds, which come trooping in such numbers in the spring, I am at a loss even what to suspect about them.  I watched them narrowly this year, and saw them abound till about Michaelmas, when they appeared no longer.  Subsist they cannot openly among us, and yet elude the eyes of the inquisitive; and, as to their hiding, no man pretends to have found any of them in a torpid state in the winter.  But with regard to their migration, what difficulties attend that supposition! that such feeble bad fliers (who the summer long never flit but from hedge to hedge) should be able to traverse vast seas and continents in order to enjoy milder seasons amidst the regions of Africa!

Dear Sir,—Last month we had such a series of cold, turbulent weather, such a constant succession of frost, and snow, and hail, and tempest, that the regular or appearance of the summer birds was much interrupted.  Some did not show themselves (at least were not heard) till weeks after their usual time, as the blackcap and whitethroat; and some have not been heard yet, as the grasshopper-lark and largest willow-wren.  As to the fly-catcher, I have not seen it; it is indeed one of the latest, but should appear about this time: and yet, amidst all this meteorous strife and war of the elements, two swallows discovered themselves, as long ago as April 11th, in frost and snow; but they withdrew quickly, and were not visible again for many days.  House-martins, which are always more backward than swallows, were not observed till May came in.

I repeat that we are reproducing White’s letters because it is the tercentenary of this rural parson’s birth, nd because he is a well-known exemplar of the man of faith and of science combined.

What a lovely turn of phrase, ‘meteorous strife and war of the elements’! Up in Selborne, Gilbert White did not have chance to observe the (to us) nearby beaches of Hampshire and Sussex, or the ground below lighthouses where birds, confused and dazzled by the life-saving lantern, were cast down after striking the glass. He would have gathered all the evidence he needed for migration, down by the sea.

Some Blackcaps winter with us these days.

Hibernation of birds was one area where Gilbert White’s instincts were wrong: unlike snakes and harvest mice, neither swallows nor any other birds hibernate; they migrate. I have seen a house martin or two, flying over Dumpton Park in Thanet, just a few metres from the coast, on 20th October one year. Is it likely that they fly south to Senegal? Conversely, is it likely that they hide in river mud, completely without trace?

About ten years ago I used to spend some weeks yearly at Sunbury, which is one of those pleasant villages lying on the Thames, near Hampton Court.  In the autumn, I could not help being much amused with those myriads of the swallow kind which assemble in those parts.  But what struck me most was, that, from the time they began to congregate, forsaking the chimneys and houses, they roosted every night in the osier-beds of the aits of that river.  Now, this resorting towards that element, at that season of the year, seems to give some countenance to the northern opinion (strange as it is) of their retiring under water.  A Swedish naturalist is so much persuaded of that fact, that he talks, in his calendar of Flora, as familiarly of the swallows going under water in the beginning of September, as he would of his poultry going to roost a little before sunset.

An observing gentleman in London writes me word that he saw a house-martin, on the twenty-third of last October, flying in and out of its nest in the Borough.  And I myself, on the twenty-ninth of last October (as I was travelling through Oxford), saw four or five swallows hovering round and settling on the roof of the county hospital.

Now is it likely that these poor little birds (which perhaps had not been hatched but a few weeks) should, at that late season of the year, and from so midland a county, attempt a voyage to Goree or Senegal, almost as far as the equator? 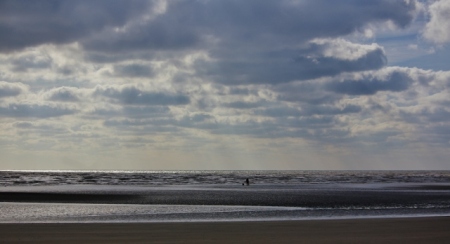 September had turned warm again, it was a good day to enjoy a sandwich in sight of the sea near Rye Harbour, and watch the world go by.

There were fewer humans than the last time I was this way, which was in August, but there were plenty of birds, as always. What first caught my eye was a small group of sand martins, swooping and swirling, stirring themselves up for the long flight to Southern Africa. Not quite ready to go yet! Was it a family group, the parents imparting their final advice before taking off in earnest?

A cormorant passed by, purposefully facing the light westerly breeze. A different spectacle altogether: its flying looked like hard work, though we know the grace they acquire as soon as they are in their watery element.

It must have been the frequent sightings of fighter planes this Battle of Britain month that set me comparing the martins to Spitfires, all speed and aerobatics and the cormorant to a ponderous Wellington bomber: killing machines both. So are the martins and cormorant killers, but not of their own kind and no more than necessary to feed  themselves and their children.

We humans know better than that of course.

Redemption? Half a mile away is an abandoned wooden hut, the former lifeboat station. It was from here that seventeen men sailed and rowed to their deaths early last century, setting out in a storm to rescue the crew of a stricken ship. They did not know that the men were safely on shore before they set out. Their monument says they were doing their duty.

It was rather the greatest love.

(Another day at the same place.)