Brandsma in the 1920’s Wikipedia

Last November, the Dutch Carmelite priest, theologian, journalist, and author, Titus Brandsma who was killed “in hatred of the faith” in Dachau concentration camp in 1942, came a step closer to sainthood as Pope Francis recognised a miracle attributed to him. Then on 15 May this year he was declared a saint by Pope Francis. There is now a campaign to have him recognised as a patron saint of journalists.

Born in 1881, Fr Titus forcefully opposed and spoke out against the anti-Jewish laws the Nazis were passing in Germany before World War II. He was arrested when Germany invaded the Netherlands and told that he would be allowed to live a quiet life in a monastery if he would announce that Catholic newspapers should publish Nazi propaganda. Titus refused and was sent to Dachau concentration camp in June 1942. The regime of forced labour and starvation undermined his health, and he was eventually killed on July 26, 1942 when a nurse in the SS gave him a lethal injection as part of the biological experiments carried out on camp prisoners.

The Synod and International Women’s Day

23 August: endeavour to know the will of GOD. Johnson.

In Summer 1762, James Boswell was about to leave London for the University of Utrecht; overseas students are nothing new. His friend, Samuel Johnson was advising the traveller:

You will, perhaps, wish to ask, what study I would recommend. I shall not speak of theology, because it ought not to be considered as a question whether you shall endeavour to know the will of GOD.

June 10, Our Lord in the Attic III. Pentecost: best gift of God above.

Last September I promised to return to the hidden Catholic church – hidden in plain view – in Amsterdam. I didn’t expect it to take so long!

Here is one of its treasures. This dove hovers over the sacristy, just above where the priest would have vested for Mass. In itself the carving is a prayer, raised by the sculptor and whoever placed it here. It also invites those who see it to prayer, especially the priest who would be preparing to proclaim the Word.

Here then is a verse from the Pentecost hymn, Veni Creator Spiritus:

O guide our minds with thy blessed light,
With love our hearts inflame;
And with thy strength, which never decays
Confirm our mortal frame.

We can make those words our own this Pentecost, and pray that all pastors and ministers – ourselves included – may have hearts aflame when they go among God’s people.

March 15, Feast of Saint Longinus. Before the Cross II: The Centurion, 1. 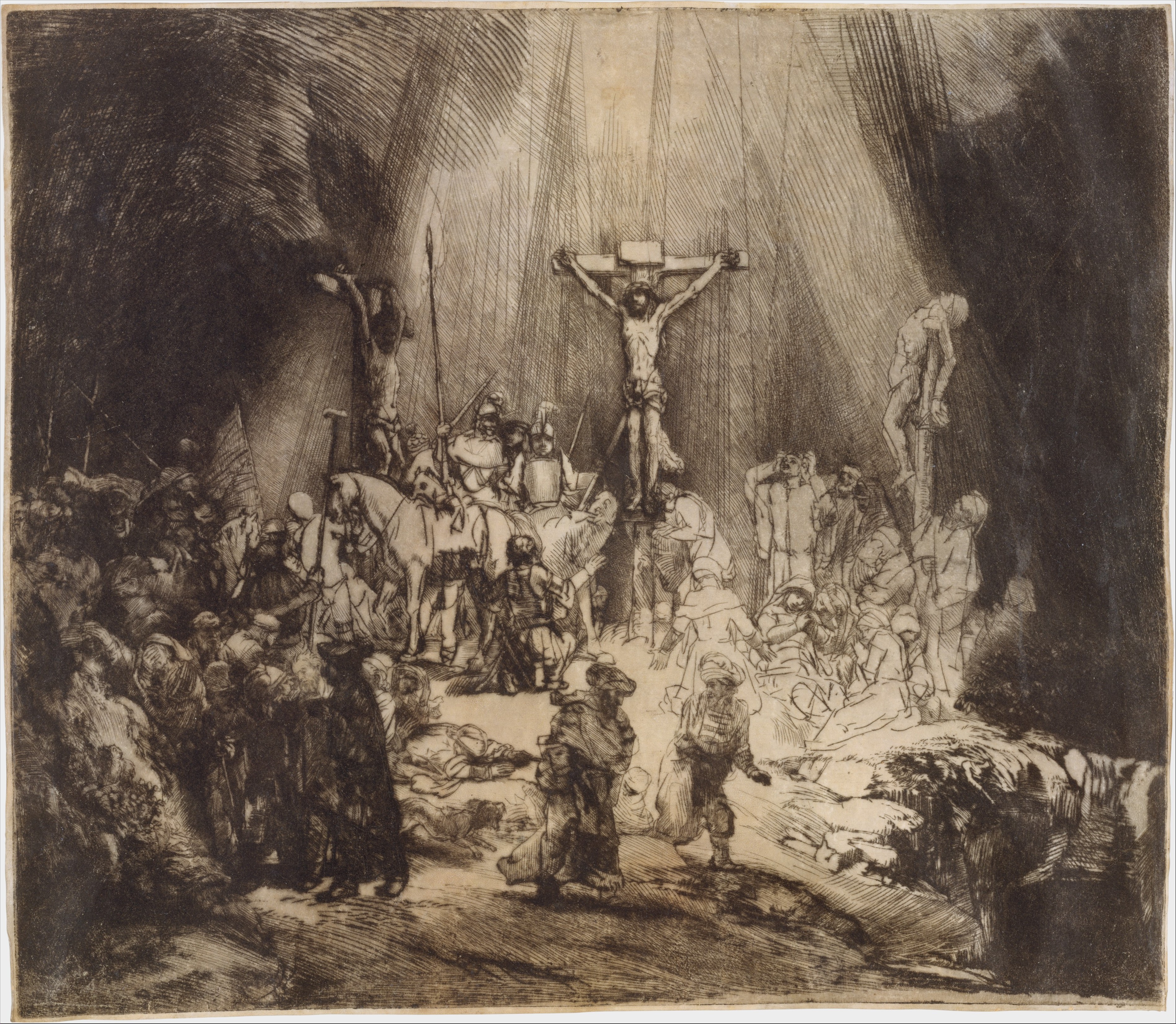 Christ Crucified between the Two Thieves: The Three Crosses

Orthodox and Roman Catholic tradition names the centurion Longinus, supposing that it was he who drove the lance into Jesus’s side. A number of traditions grew up around him in the early church, among them that he was martyred. As a saint, he is now remembered by Roman Catholics on the 16th. October, though his original feast day was the 15th. March (still kept in the Extraordinary form). He appears in Luke and Mark’s gospels confessing by himself, and in Matthew, confessing together with the other guards. The spearman in John’s gospel is only identified as “one of the soldiers”; we cannot know if this was the centurion himself or one of the soldiers under his command. Nevertheless, responsibility for ensuring that all three crucifixion victims had died would have rested with him.

In this print, Rembrandt depicts the moment of Jesus’s death, after three hours of unnatural darkness. The eye is drawn towards Christ on the cross, but the crowded scene is one of contrasting human responses to revelation. Some run away, others stand in awe. Mary has fainted, overwhelmed by grief. Mounted Roman soldiers continue, unmoved, in their menace, but the centurion kneels at the foot of the cross to declare “Surely this was a righteous man”.

Though Luke doesn’t record that the centurion heard the exchange between Jesus and the two thieves, it seems likely that he would have made it his business to listen. We cannot know at what point during that day he recognised the uniqueness of Jesus among all the men he had executed, from the trial where Pilate declares him to be innocent, up to the time of his death. But I imagine that Jesus’s extraordinary compassion towards an anguished soul (while in the midst of his own suffering) compounds with all the other questions that Jesus had raised in the centurion’s mind that morning – and with this strange darkness – to persuade him, not only of the injustice in which he has played such an active role, but also of its massive cosmic significance.

The penitent thief (a Jew) and the confessing centurion (a gentile) both recognised the truth, and indeed the understatement, of the words on Pilate’s sign intended to mock Jesus: “King of the Jews”. The true King welcomed them, one at the point of physical death, and the other in a radically restored life, purpose and hope. The one, cursed and shamed by the world for crimes he acknowledged, yet received by Jesus; the other, an enforcer of Roman law and follower of the imperial cult, moved and shaken by his involvement in an act of barbaric injustice, now knowing that he was in the presence of the true “Son of God”. And so he also welcomes us, whatever our past, and whatever our blindness has been towards him. He welcomes us to participate in a kingdom on earth that has not grown out of human competition or military might. He welcomes us to the very presence of the living God.

Rupert Greville is a member of the L’Arche Kent Community.

Before Amsterdam had numbers for houses, people used plaques on their walls to identify their home or business premises. Perhaps this one belonged to one of the many exiles living in what was then a small city on a marshy riverside. Here is Joseph taking a watchful Mary and Baby away to Egypt; He has his tools with him, including one very long saw. Perhaps he cut his own planks from the tree, or maybe it pleased the artist’s eye to show it at the pinnacle of the picture. Joseph may have given up his business but he was not giving up work.

Exile was a serious business, true enough, but Joseph was able to start work in Cairo and support his family. (The Franciscan church there that bears his name is said to be near the Holy Family’s home.)

Here is a prayer from USPG.

O God, who made your home among us in Jesus of Nazareth, we pray for those who have been forced from their homes and now live as migrants and refugees. Bless them and all who work to bring them relief, comfort and a new home.

We could pray, too, that refugees may be allowed to find work and education in their exile, that they may be better equipped to help restore their homeland when they are able to return.

Wishing all our followers, friends and readers, regular or occasional, a blessed Christmas, and a New Year where Peace prevails.

We remember that many are forced to be away from home, or without loved ones, especially for the first time, or facing illness or poverty; and pray that the Peace that surpasses understanding will find its way into their hearts.

God Bless us all,

Will and Team Agnellus.

The Flight into Egypt from a plaque at Amsterdam’s City Museum.

October 10, Traherne XI: His desire is yours.

O the nobility of Divine Friendship ! Are not all His treasures yours, and yours His? Is not your very Soul and Body His : is not His life and felicity yours : is not His desire yours? Is not His will yours?

And if His will be yours, the accomplishment of it is yours, and the end of all is your perfection.

You are infinitely rich as He is : being pleased in everything as He is. And if His will be yours, yours is His. For you will what He willeth, which is to be truly wise and good and holy. And when you delight in the same reasons that moved Him to will, you will know it.

Though perhaps you will know that delight without having the words to express it in Christian language as Thomas Traherne does here. Laudato Si!

23 September: Jesus in the Attic II, Persecution leads to Amsterdam.

I recently came across a long poem called ‘Our Blessed Lady’s Lullaby’ and then found out about its writer. My research led me to Our Dear Lord in the Attic, an attic in Amsterdam, where we visited him. Here is one verse from the poem: Mary is speaking.

The earth is now a heaven become,
And this base power of mine
A princely palace unto me,
My Son doth make to shine.
This sight I see, this Child I have,
This Infant I embrace,
O endless Comfort of the earth
And heaven’s eternal Grace.


Richard Rowlands alias Verstegen wrote this hymn around 1600. He was an English Catholic who fled to Amsterdam after escaping from imprisonment for his faith at home. He made a new and prosperous life in Amsterdam, a Protestant city.

All the Catholic churches there were closed down, including the big church at the Beguinage Convent, now a Scottish Presbyterian church. The good beguine ladies there simply carried on after moving their place of worship to ground floor rooms in their main building. I do not know where Rowlands worshipped, but a little after his time people met for Mass at another city centre site, now known as Our Dear Lord in the Attic. its presence was an open secret; the people of Amsterdam were not given to executions for those who worshipped differently to the official norm.

The Attic Church remained open till the mid nineteenth Century when a new Catholic church was erected nearby. It is now a museum, with the Church area all ready for the occasional worship that takes place there.

This statue of the Madonna and Child belongs here.

We will return to Our Dear Lord in the Attic.

There are many links to the poem on the web, some set to music.

This blog is not meant to be the holiday snaps of any of the contributors, but these fit well with this week’s feast of John the Baptist. And contrast them with the rather solemn fountain at Saint Peter’s in Rome that illustrated the Infallibility posts from Friar Austin!

The tulips give the location away: this surprising fountain is in Amsterdam and was enjoyed by young and old. Especially young? I hope their phones were waterproof.

The waters of Baptism, of course, are free for anyone to request and receive. And they give freedom to have fun for Eternity! Religion need not be buttoned up and strait-laced, enjoy being fully alive! If you can’t find a fountain, find a friendly puddle, Splash, splash, splash, as Abel would say!