5 December: You have to help me VI; learning to help yourself.

Bruno is a babe in arms, still dependent on milk from his mother, as is to be expected in one so young. But Bruno has other ideas. He sits, he watches, he thinks about what he sees. He thinks about his hands and feet, moving them around and sucking them. His mouth and eyes bring him plenty to think about.

The holiday cottage had no dining table so Bruno was sitting on his mother’s knee as she ate her pasta with tomato sauce, a delicate balancing act. Bruno sat, watched, thought about what he saw. He saw Mummy eating off a plate, he saw Daddy eating off a plate; he saw Granny and Grandad and Aunty eating off their plates. He saw hands moving to mouths. He thought, I can do that. So he did.

There’s no going back: Mummy and Daddy, you have to help me to eat solid food!

I am reminded of a previous post in this series where Chico, a young sparrow, was sitting, watching, and thinking about what he saw. And almost coming to grief.

We have to be ready to feed each other and keep each other safe from choking or from hurting ourselves. It may be offering someone hospitality or a taste of this or that, supporting the local food bank or international charities like Mary’s Meals or Water Aid.

You have to help me!

When Fr P visited recently, he gave us this prayer, asking ‘Granny Annie’ to pray for us.

Not every prisoner can be as ready to accept the sacrifice of confinement as Bonhoeffer was. Let us us remember them all at Christmas time in this prayer shared with us by a prison chaplain.

Two poems, a century apart; two poems about War in Belgium. The first is the last stanza of Sir Walter Scott’s ‘The Field of Waterloo’, the second chosen by grieving parents of a man so young they were still reckoning his age in years and months. But Scott’s ‘The son, whom, on his native shore, The parent’s voice shall bless no more’ is yet blessed by his parents’ ‘trust in Christ to meet again’ and their prayer, ‘Rest in peace’.

The Raid on Zeebrugge was an unsuccessful and bloody attempt to block the port which was used by German U-boats to attack allied shipping. RMLI was the Royal Marines Light Infantry, based in Cheriton where George lies buried.

Was there much progress in a hundred years? Let us pray that all casualties of war may rest in peace, and that all of us now alive may live in peace.

28 May: a Little Child shall lead them, Before the Cross XXVI.

These Easter Lilies were placed before a Madonna and child, but a very Paschal, Easter-minded Madonna and child. Two years ago we looked at a portrait of Mary and baby Jesus in a pieta-like pose, and I urge you to revisit that post now, to complement this one.

That old post considered two paintings from the studio of Rogier van de Weyden, of the mid-XV Century, the Madonna and a Pieta. In each Mary is tenderly holding her son, whose pose as a baby matches that of his lifeless corpse. This is not what our artist in Elham has in view. Jesus may be four years old here, a boy, not a baby, but still dependent on Mary and Joseph for everything.

The boy is very much alive, yet he is standing as if practising for his work on the Cross. He is lightly supported by his mother; at this age he can walk for himself, but that gentle uplift is reassuring. As for Mary, not for the last time she ponders these things in her heart, the heart pierced by the sword of sorrow.

Jesus is about to step forth from her lap. Any parent will know the excitement and trepidation of following a small child, where are they going, what dangers can we perceive that they do not? But letting them lead us is part of growth for the child and also for the parent who is offered the chance to see the world through fresh eyes.

Mary could not prevent the death of Jesus on the Cross but she was there to welcome him on the third day. Isaiah tells us that a little child shall lead them: may we follow him through all life’s trials to our resurrection in his Kingdom.

Going viral XXV: Where is our robin?

It was lunch time and chat time at the Glebe, just two of us there to be together, preserve social distance and be safe and happy while the watering got done.

D remarked that he had not seen a robin all morning, which was unusual, even unheard of. So we listened: the blackbirds were singing, the seagulls were screaming, and the traffic was rumbling by, but no sound of a robin. Had the black-and-white cat got it? Neither of us had seen a body.

Then we realised why the robins were so quiet. At the top of the arch over the gate was – a baby robin, in full view of those murderous seagulls and magpies. Indeed, a gull swept down very near the arch as we watched. From out of the hedge flew a parent and chivvied the baby away. Let’s hope it survives!

22 December: the hidden work of incarnation. 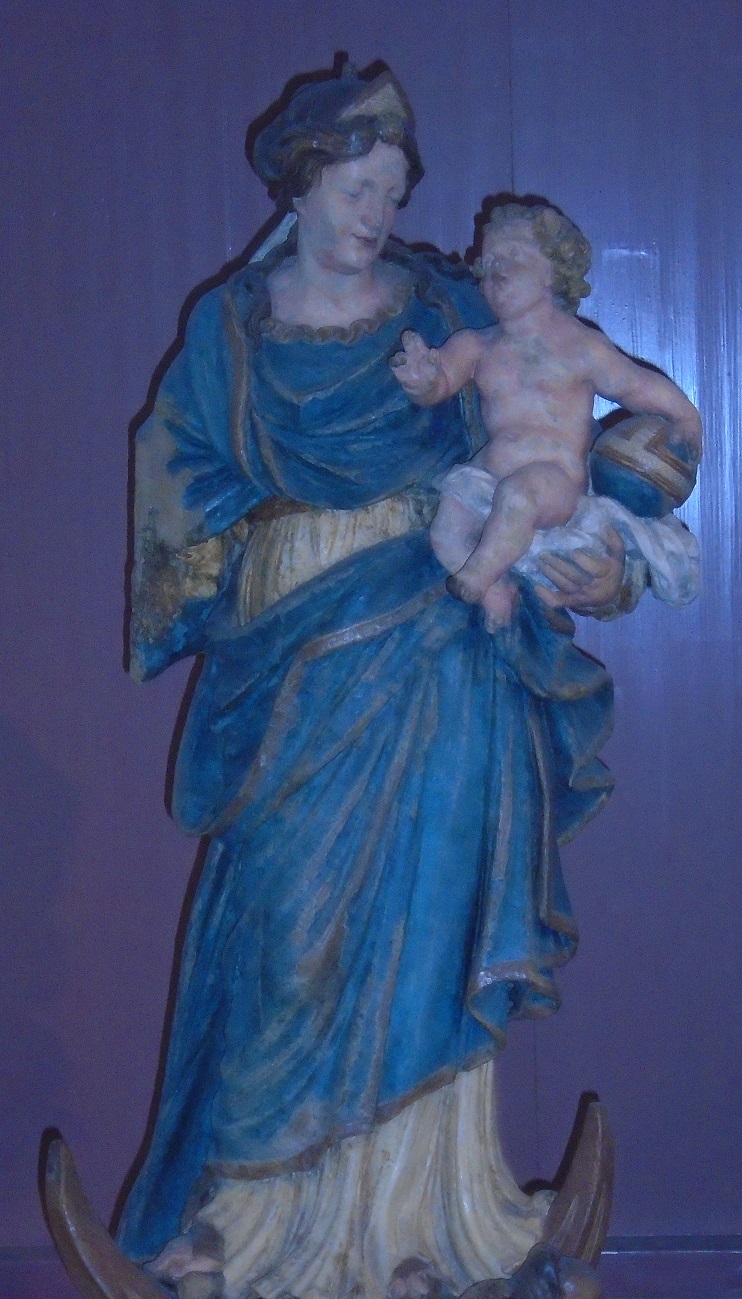 The process by which the human personality is formed is the hidden work of incarnation.

The helpless infant is an enigma. The only thing we know about him is that he is an enigma, but nobody knows what he will be or what he will do. His helpless body contains the most complex mechanism of any living creature, but it is distinctly his own.

Man belongs to himself, and his special will furthers the work of incarnation.

Do we accept that there is more to being human than flesh and blood? That there is a will, soul or spirit animating each one of us?

We could say that parents, grandparents, siblings, teachers are charged with enabling the work of incarnation to take place in the child; not to break the child’s will but to provide a fertile ground for it to grow.

Of course we refer to the Incarnation especially in regard to Jesus. His humanity was shaped in his relationship with Mary and Joseph; we have to thank them for their part in his development, his incarnation.

In this statue from the church of Our Lord in the Attic, Amsterdam, Mary is supporting her Son as he reaches out into the world, to you and to me. Let us pray for the grace to perceive how to support the children we live and work with. 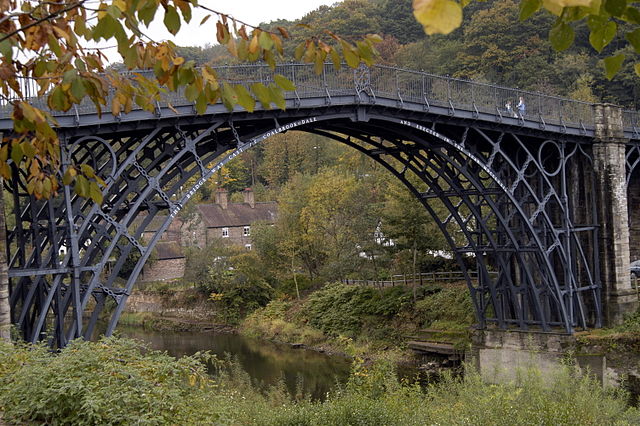 We are looking at some of Maria Montessori’s ideas on The Child in the Family in the light of Mary and Joseph’s experience of parenting. Bearing in mind our own experience and observations, how do we feel about this statement? (p25).

Clearly it is useless to correct defects that the child will no longer have when he is an adult.

How did Mary react to the ‘misbehaviour’ of Jesus stopping to listen and talk with the wise men in the Temple? A gentle reproach, and she stored all these things in her heart. Let us pray for discernment in all our dealings with children and young people.

17 April: Stations for Peter XI: Jesus speaks to his Mother. 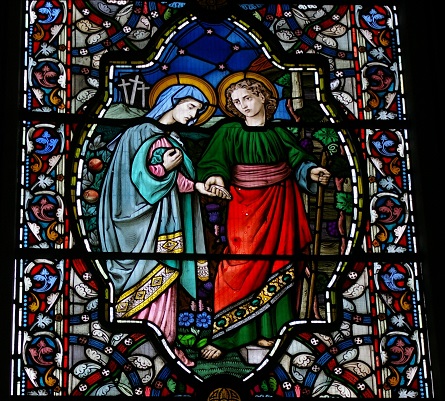 Jesus spoke to his mother, but Peter was not beside him and Mary. Jesus asked John to care for his mother.

I was not there, not really there. Back in the crowd I was.

I don’t think he could even see me, and no way could I hear his gasping words, but young John was there, John was listening closely.

Jesus knew John was there, and his mother, Mary. He told John to care for her.

I would have done it.

Didn’t he care for my mother-in-law?

I let him down again.

Let us pray for everyone caring for other people’s parents, and their own; for adoptive and foster children and parents, and for all who work with children.

Jesus, remember me, when you come into your Kingdom!

22 March. Before the Cross IX: Fresh, accessible and slightly subversive. 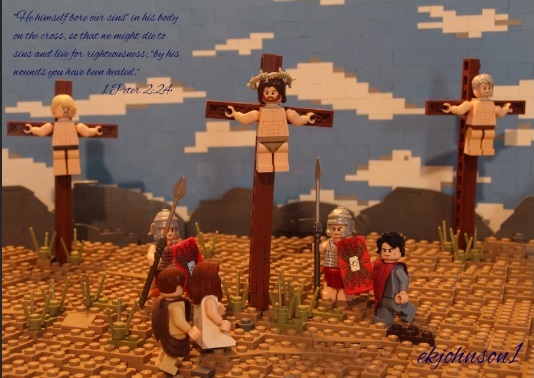 Bearing of the Cross

My son is now 14, and thinks he’s much too grown-up for Lego. But I’ve really enjoyed these years of revisiting the world of long six-ers and square flat four-ers, finding myself far more creative now with the pieces than I ever was as a child.

This crucifixion scene is an image designed to appeal to the younger Bible student, of course, as much as to adults. The quotation from Peter’s first epistle connects the death of Jesus with our response in dying to sin and living for righteousness (covenant justice, that is, lest we lapse into moralism). It indicates that its production by EK Johnson was an act of faith and this is important to me, as it is with all Christian art.

But shouldn’t a subject as serious as this be treated with more gravitas than Lego can offer? My inner conservative complains that “Lego Jesus” just seems wrong, diminishing his lordship, maybe, or infantilising his mission.

My inner iconoclast replies that this Lego scene represents a gentle mocking of religious art – with all its trappings of patronage and power; pride; ill-gotten wealth and elitism – and not of the cross itself. Wasn’t the cross always meant to serve as a massive lance to the boil of religious pomposity?

I like this image because I believe that the gospel story should be communicated meaningfully by every possible means. Fresh, accessible and slightly subversive, a Lego representation of Jesus connects and engages with today’s culture in ways that renaissance art and stained glass simply cannot.

EK Johnson is clearly keen for us to grasp the solemnity and significance of the event he depicts. “He himself bore our sins in his body on the cross … by his wounds you have been healed” reads the text. The apostle Peter is alluding to Isaiah the prophet, making sense of Christ’s crucifixion through the lens of the Hebrew scriptures and the promised “suffering servant”. If we find the Lego distracting or overly provocative, this text should leave us in no doubt that this was the most profound, powerful and momentous event in all of human history. It was the day the God of Israel worked his salvation for the world; for our lives.

Lego might not give us everything we want in a crucifixion scene, but it communicates its historical truth simply and clearly. Every age in religious art has provided its own distortions and distractions, however well-intentioned the artist. We inherit notions of the “sublime” from the Romantics, for example, but it’s a misguided ideal, because it lacks humility. There is certainly humility in Lego. Simple blocks and simple figures remove much of the element of human sophistication. And with that gone, we can begin to grasp – and be overwhelmed by – the love of God demonstrated on a hill in West Asia, two thousand years ago.