‘Shall I ever,’ he asks on Easter Day, ‘receive the Sacrament with tranquility? Surely the time will come.’

Doctor Johnson was staying with his friends the Thrales when he wrote this, well aware of his own sinfulness and the gulf that that could give rise to between himself and God, but also believing that salvation is ours: Christ has Passed-over through death to eternal life and so shall we. Believing does not mean being totally assured in my mind and heart that salvation is mine, and for the melancholic Johnson, all the theology in the world could not enkindle such certainty. Rather it is to accept the promise of salvation, even with a tiny part of myself, and forgive myself for my unbelief. Even a mustard seed faith can leaven the lump that I am; I can receive the Sacrament in fear and trembling, but at the same time, at a deeper level than my doubts, with tranquility.

Know ye not that a little leaven leaveneth the whole lump? Purge out therefore the old leaven, that ye may be a new lump, as ye are unleavened. For even Christ our Passover is sacrificed for us: Therefore let us keep the feast, not with old leaven, neither with the leaven of malice and wickedness; but with the unleavened bread of sincerity and truth. (1Corinthians 5:6-8)

I thought I would start today’s reflection from a picture.

Usually the last Supper seems to be shown as an all-male affair, though I find it hard to imagine Jesus excluding such strong supporters as Joanna, Mary Magdalene, Mrs Zebedee or his own Mother. So here we have the Pentecost window at Saint Aloysius, near Euston Station in London. No apologies for the street scene visible behind it: the message of this window is not just for us, bu for the world outside the church building, where we spend most of our time.

The next picture shows another momentous moment, one from our own days. Here is Pope Benedict sitting down to eat a festive meal with poor people from his diocese of Rome: an unprecedented and prophetic event. It was not so long ago that Gormenghast style protocol decreed that nobody should see the pope eating. It was, perhaps, a useful excuse to avoid dining with political leaders who might capitalise on the photo opportunity, and claim papal approval of their policies rather than their cuisine.

The poor of Rome could not gain influence or anything other than a good meal in good company to celebrate Christmas; Benedict saw to it that they were not left out in the desert of their poverty.

The rules for the Passover that Jesus celebrated with his disciples make clear that all Israelites are invited to the feast, and that their neighbours should make sure none are excluded.

The people of Israel could trace their birthday back to the Passover and the crossing of the Red Sea into the desert of Sinai: as Christians we can look to the events of Holy Week and also to Pentecost as our foundation days, or birthdays. So it is appropriate to show Pentecost today, a gathering where Mary is prominent and one or two more female faces can be seen. The Spirit was poured out n them too; as it has been on all baptised men and women. Let us be as missionary as they were, accepting the paradox of passion and pain, of desert and defeat as essential to our story; and being at one with the people on the far side (which is merely centimetres away) of the church’s stained glass windows.

I give you a new commandment: that you love one another.

26 May: Pilgrimage to Canterbury VI: a memory unlocked.

I was talking to Rupert, one of our contributors during Lent, at the L’Arche garden this morning. He reassured me that the walk uphill from Dover on the revised route is ‘doable’ if taken steadily, and he knows most of the potential walkers. It will be somewhat steeper than this section of the Pilgrims’ Way on the other side of Canterbury: use your imagination to see the Cathedral, tucked between the distant hills near the centre of the photo!

I have not walked that steep path since Easter some 40 years ago, when a few of the community were living in north Dover. On Maundy Thursday I was helping Sue, a Jewish assistant from Toronto, prepare for a community Passover meal, when we looked out and saw a thrush hopping around a snow covered lawn. (What’s that bird, Maurice? It looks like our Canadian robin but has no red feathers.)

By Easter Monday all was serene and sunny, so Sue and I decided to walk the footpaths to Barfrestone. We were not expecting to negotiate the construction site for the A2 road, but we got over that and arrived in time for our next shift.

At least this time we will be prepared for the busy A2, which carries traffic aiming for the ferries to the continent. The footpath is safely in a tunnel underneath. And it’s ‘doable’!

For Rupert’s posts, enter ‘Before the Cross’ in the Agnellusmirror search box and you’ll find his reflections and a few other people’s.

19 April, Good Friday. Stations of the Cross for Peter: XIII, Jesus’ Body is taken down for burial

Peter remembers the Olive Garden on Maundy Thursday when he has sliced off Malchus’s ear, and the heavily guarded garden around the tomb the next night.

Joseph had enough influence to get hold of the body and bury it. He had to be quick though. If he had been found still moving it when the Passover feast started there there would have been even more trouble.

The guards were watching. They had taken over Joseph’s garden and even he could not send them away. Right down to that Malchus with his mended ear, they were ready to start on him if he put a foot wrong. They would have been glad to get their hands on a high-up like Joseph.

He had to hurry Mary Magdalene away without doing everything properly.

Jesus, remember me, when you come into your Kingdom.

Let us pray for all who live in fear, whose lives are a mess, who do not feel they have done things properly. May they feel God’s forgiveness and love.

Jesus, remember me, when you come into your Kingdom.

Image from Missionaries of Africa.

July 16, What is Theology Saying? XVI: The Eucharist 3: No way can creature = Creator. 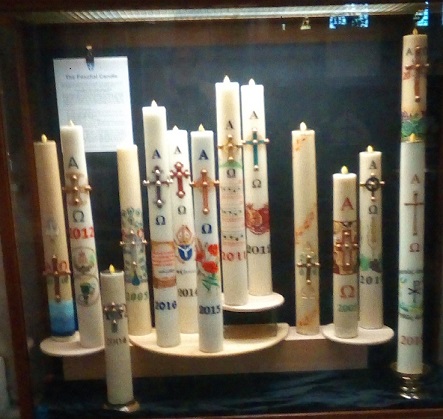 Jesus told Nicodemus of our need to learn to live differently – to realise that we are gifted with ourselves in order to become gift for others – a way often called tough love; not counting the personal cost involved in being concerned primarily with mutual well-being and not just me alone. A child walks because adults wait for and expect this – often before it is physically possible! Love means not just self-giving, but expressing confidence that you will be all the better for it, and flourish accordingly. But to challenge like this presupposes trust – the trust of a child for its parents.

Our Eucharistic celebrations look very churchy and remote from everyday living – carefully choreographed rituals, strange attire worn by leaders sitting apart, scripts for designated readers only – all well-intentioned to enhance the beauty and centrality of the Eucharist – but does it? It certainly is central in our worship – but what about our everyday living? Does your Sunday Mass impact noticeably on your social, political, economic involvement?

We are celebrating the hospitality of God in a gathering in which we are invited to be co-hosts; and this happens in the real presence of Jesus. He told his disciples to continue celebrating the Last Supper, interpreting his death and Resurrection in the light of the Passover. The Exodus is central for Jewish faith – the setting free from oppression – since love depends on equality. But this not simply a one-off event of long ago – it is a permanent reminder of how God is with us, as equals.

Do we have a problem here? Equality is of the essence of love – but God cannot have any equal by definition; does this mean God cannot love? Revelation is clear about the gulf between us – no way can creature = Creator. So we seem destined for an infantile authority/obedience relationship with God through keeping the rules. There is no equal to God. However kind, benign and compassionate the Creator is, we remain creature and Creator.

March 21st Monday of Holy Week: Who prepared the feast?

Saint Luke (22:7-13) tells us it was Peter and John that Jesus sent to prepare the Upper Room for the Passover Feast. He goes on to say that ‘when the hour was come, he sat down, and the twelve apostles with him’ (v17).

Traditionally, of course, we see paintings of just the thirteen of them around the table, John leaning against Jesus, Judas already detached, off to one side. But was Jesus alone with his apostles? I wonder. From what we know of Mrs Zebedee, she would have been incapable of letting one of her boys get on with such an all-important domestic task and ritual without her help and advice. She would have ignored it if John was still cold-shouldering her after the public embarrassment of her trying to get him a top cabinet post (Matthew 20:20).

The question is all but answered when we read about them at table, asking who would betray him. Jesus said it was one of the twelve (Mark 14:20); no need to say that unless others were there.

Fast forwarding to Pentecost Sunday (Acts 1: 13-15), we find 120 people gathered in the Upper Room, including the Lord’s Mother; a dozen would have been rattling around. So I am inclined to read the Gospel accounts as though the 120, more or less, were present at the Last Supper, including the women mentioned in Acts 1.

No potatoes to peel for the Passover, since they had not yet been imported from South America, but plenty of jobs to do. I’m sure Mrs Zebedee and the other women were happy enough to let John and Peter slaughter the lamb; after all, they were fishermen, used to killing humanely. But trust her lad and Peter to put the meal on the table? I wonder!