This derelict chapel is lost in the Herefordshire countryside. The church at nearby Richard’s Castle is no longer in regular use for worship. Has God abandoned the Marches (the Welsh/English border country) or have the Marches abandoned God?

It’s more complex than that. People have gone. Farm work is done mechanically; the railways that employed thousands have closed or greatly reduced the number of workers, and so on. But also people have indeed turned away from Sunday worship.

This chapel was built around 1810 by local people who responded to the Methodist Revival led by the Wesleys. They wanted to live the Christian life more fully and when they were cold-shouldered by the established Church of England, they erected chapels that look as much like dwelling places as churches. Other  groups were also building ‘dissenting’ chapels, like the Baptists and Congregationalists. One of my ancestors is believed to have ministered at Bethel Chapel in nearby Evenjobb, across the border in Wales.

It is a shame to see the building abandoned, the lawn gone to nettles, brambles, and buttercups – we can welcome the buttercups, but the others will soon be preventing people from entering. It is unloved. Perhaps no descendants of the worshippers live nearby, or they don’t know about the chapel, perhaps they don’t care.

So do we Christians pack up and go home? Or do we try to tune ourselves to Christ, live as he would do, in season or out of season?

In a final plug for Rowan WIlliams’s  Luminaries, a few words from his reflection on Archbishop Michael Ramsey.

You’re free to offer God’s love quite independently of your own security or success. Sometimes the world may be in tune and sometimes not; sometimes there is a real symbiosis, sometimes a violent collision. But the labour continues, simply because the rightness of the service does not depend on what the world thinks it wants and whether the world believes it has got what it needs from the Church. (p116). 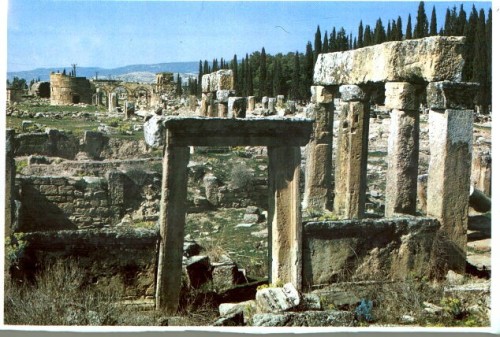 When we travel, we hope that when the heat gets too much or we feel hungry and thirsty, God’s Providence may bring us a friendly face and a chance of hospitality. But tourism takes us through areas of ruined classical cities, where once was a lively population and hospitality was likely. However, that population died long ago, and all they have left is the skeleton of a dwelling. This picture reminds me of a similar doorway, to a house which no longer existed, when I visited Athens in my late teens, when a military junta ruled Greece.

I had taken a bus from the airport into Athens in the early hours. By five in the morning it was light, and beginning to be warmer. I had planned to visit the Parthenon before the crowds arrived, so I sat down on the step in front of a doorway like this to gather my wits for the climb up the hill. But there was an old wooden door in the doorway, and this suddenly opened behind me. A fellow traveller, an American I think, emerged, wished me good morning and went on his way. He had slept the night behind a door and a door frame.

It was a comical, theatrical moment, as if an ancient Greek house servant had come back to life to greet me.  Like Silas and St. Paul, I was wondering what signs or messengers might show up in my dreams, to send me off on a more purposeful path.