Severe against the pleasant arc of sky
The great stone box is cruelly displayed.
The street becomes more dreary from its shade,
And vagrant breezes touch its walls and die.
Here sullen convicts in their chains might lie,
Or slaves toil dumbly at some dreary trade.
How worse than folly is their labor made
Who cleft the rocks that this might rise on high!

Yet, as I look, I see a woman’s face
Gleam from a window far above the street.
This is a house of homes, a sacred place,
By human passion made divinely sweet.
How all the building thrills with sudden grace
Beneath the magic of Love’s golden feet!

From “Trees and Other Poems” by Joyce Kilmer

And a cave at Bethlehem became a sacred place, By human passion made divinely sweet. May love’s feet dance in your home this Christmas.

August 8: What Obstructs our Focus

Alexander Nevsky (d. 1263) was a popular Russian soldier who defeated Swedes, Lithuanians and Teutonic Knights in battle. The Russian Orthodox Church declared him a saint. Prokoviev’s cantata Alexander Nevsky was sung at this year’s first Prom Concert in London. It contains the lines ‘Peregrinos exspectavi’ (I expected pilgrims), then ‘Victory to the Crusaders, death to the enemies.’

This photo shows not Alexander but a different crusader, whose statue is prominent in the centre of Brussels. This is Godfrey of Bouillon (d. 1100) who took the title ‘Advocate of the Holy Sepulchre’ after he had been the first to defeat the Muslim occupants of Jerusalem, after three years of campaigning. The patriarch of Jerusalem (a man from Pisa) was forced to crown Godfrey’s brother Baldwin as the first Latin king of Jerusalem. Another brother, Eustace, inherited Boulogne, and a family estate in England.

Perhaps, with such a widespread confusion of the words ‘pilgrim’, ‘crusader’ and warrior we should not be too surprised that a number of people from Islamic cultural backgrounds regard European and Western economic and military dominance of the world as evidence that crusaders, tourists and trade delegations are  three versions of the same thing, all opposed to Islamic traditions. 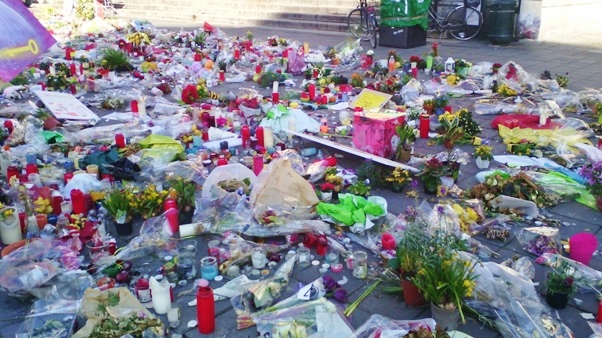 Belgians who wanted to let the world know their heartbreak after the subway train bomb went off in Brussels in March this year, left their flowers and memorial tributes to the victims in front of the Bourse, the Stock Exchange. Finance deals and power-brokering are one pattern of domination.