Notes from a Pilgrimage: Bastia San Paolo and San Damiano

This morning we went to San Paolo in Bastia, where Clare went, accompanied by some of the friars, after they had received her into their fraternity at the Porziuncola. History does not record what the Benedictines felt or thought when she turned up at 2 or 3 in the morning with a bunch of scruffy young men, and in fact they did not take her into the enclosure but possibly into the guest house, or even the servants’ quarters. This becomes quite clear when you are there as the chapel with the altar which scholars seem certain is the one to which she clung when the family accosted her, is obviously not a big monastic choir and would never have had rooms for all the nuns. So it must have been some sort of outside chapel. It is quite little, perhaps three times as big as our chapel in Hollington.

The sister who always used to bring over the Mass things for us from their monastery in Bastia was called Sister Noemi. But about two years ago she was elected abbess so we have not seen her. So it was a lovely aurprise when she came over herself together with the previous abbess, Madre Cecilia, who had been abbess when we had the Poor Clare pilgrimage and had gone to their monastery as they are the descendants of San Paolo. We had a nice chat, she told me that they had a profession last week but have also taken in six elderly sisters from two monasteries which have had to close. The protomonastery have done the same, so it looks as if there have been several closures over the last year or so. I asked her if there was really nothing in their archives (which is what they had told me earlier) about the incident with Clare and her family, and she replied that she had been thinking about it too and thinks it possible that there is something on the archives of San Giuseppe in Assisi. When the monastery was invaded, the sisters grabbed what they could and fled, but went back late to collect other stuff. Some sisters went to Bastia but some also went into Assisi to the monastery of San Giuseppe. So I will write to them (sometime) and see if there is anything there.

We had a beautiful Mass and we three Poor Clares renewed our vows. The other two are both from the Philippines originally but now in different monasteries in USA. They are having a wonderful time, bowled over almost every day! They will go home exhausted but topped up for a long while to come.

So back to the Casa for pranzo and a minimal reposo since we were back in taxis at 3.45 to go to San Damiano for Clare, These are the Clare days. There were crowds of people there and since nobody is allowed to talk inside the monastery, I had to do all the input outside. Murray is on good terms with the Irish friars there, and asked the reason for this new prohibition which makes things very difficult. He said that there had been some incidents and friars leading groups had been very confrontational with the resident friars so the whole community in chapter had decided to insist on silence throughout the monastery. Understandable since it is not only their home but also their novitiate but hard on those who come for a once in a lifetime visit. One our way back through the Piazza Commune, there was a concert going on to raise money for those whose homes were damaged in the earthquake. This includes some of the Poor Clares, mainly those in Camerino as you probably know. I had a couple of letters to translate about it which Cortona were going to circulate.

We closed our visit to San Damiano by going into their small conference room where we had a Ritual of Healing. Murray had found a little bottle of nard so we used that, the scent was wonderful and lingered. It was especially appropriate as at Bastia we had used the gospel about Mary anointing Jesus’ feet with costly ointment, pure nard. People really gave themselves to the ceremony and it was very moving. As it is a small group we both anointed everyone and then Murray and I anointed each other. Then we hopped back into taxis and up to the Casa where their day was not finished since they had a lecture at 6 on the Office of the Passion in preparation to La Verna tomorrow and after supper Murray had a poetry reading. Everyone was tired but as he got into his stride they all got caught up in it and woke up and entered into the poems. He does it so well and the poems he uses are very accessible and he introduces them well, so it is always a good experience.

A long day but a good one. Tomorrow off to the mountain, two hours nearly each way by bus; early start, 6.45 breakfast, never my favourite moment, watch this space.

Love to all and prayers in each place ft

Notes from a Pilgrimage: VII. 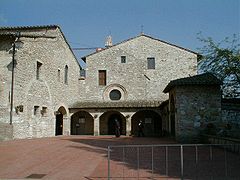 Notes from a Pilgrimage

Dearest All,
On 12th we had a busy day and went up to Assisi to collect Pilgrim’s Handbooks, to shop for the Christmas Pranzo in Rieti, to contact Sister Ectorina at the Cabrini Centre in Rieti and confirm dates, numbers, times of arrival etc etc etc. All done.
On the way back we stopped at the Springs of Clitunno near Assisi, at my request. I had been before but they are so beautiful and tranquil, water gushing in many small springs from beneath the rock of Subasio into a wide shallow lake which is always clear because the water is always on the move, gently but unmistakeably.
I am very interested in the long tradition of healing in that area. San Damiano was a place of healing which is why the chapel was dedicated to St Damiano, and in pre-Christian times, to Castor and Pollux, the two Roman gods of healing. There are also other springs higher up the flank of the mountain near San Damiano which have been healing springs, again from Roman times. So the tradition which connects Clare with healing has a long root.
Yesterday we did very little. André is still in jet lag, he reckons a day for every hour’s change of time which is a useful rule of thumb. Murray, who is lactose intolerant, ate an ice cream and forgot to take his pill because we were having so  much fun, had had stomach cramps all the previous night. I am in my usual crude good health but felt tatty in sympathy.
The pilgrims were due the next morning. At that stage, nobody wants them to come but at the airport the excitement begins to build and the sense of starting a work, which simply grows as they turn up one  by one.  This was all the more so as everyone had their luggage and all seemed younger than sometimes with no health issues except one lady who turned up pushed in a wheelchair. To say we were struck dumb is a mild account! Pilgrimage is called the prayer of the foot, so how do you do that in a wheelchair and, even louder, how were we going to do it for someone in a wheelchair? However it seemed she is more mobile than appeared. Anyway she walked spunkily to the far end of the airport and managed the coach with no fuss, and found her room, came to dinner, all normal. Sighs of relief from the staff thinking of some of the places and all the steps!!!
Now everyone is having some riposo and we hope they turn up for the first session at 5.00 pm.
It is extremely hot here and the cicadas are blasting away like car alarms making it sound hot as well. However your true Romans have got their jackets on because it is September and there might be a draught! All for now, watch this space
FT

Women may have been seen as second-class humans in past ages, yet there have always been saints who stood aside from  what society and family expected of them to live as God called them to.

While aristocratic women may have had more resources to be able to arrange this, they would have been lined up for profitable marriages arranged by others. Not necessarily a doorway to happiness or fulfilment at any level. We have already met the Saxon princesses Eanswythe and Mildred who were given the grace to hear the call and to convince others that they were doing God’s will by entering religious life. Clare was another such aristocrat, and an influence still felt today.

Let us pray to God our Father:

Saint Clare, Pray for us.