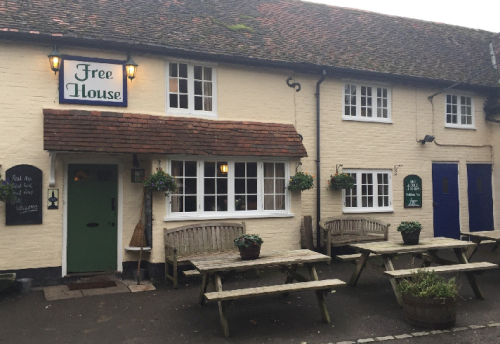 Many flowers have English names that speak of the faith of those who named them. We saw these resplendent Michaelmas Daisies in Folkestone, next to Saint Eanswythe’s Pool which we have visited before on this blog. It’s where the saint brought clean water for the townspeople and her sisters.

But today we remember Michael the Archangel, whose name means ‘Who is like God?’

Who indeed? Passing through Tonbridge I saw another fine clump of Michaelmas Daisies, where a seed must have taken root alongside the line. Too much reflection from the window to grab a snap, but maybe more people see them than St Eanswythe’s.

Let’s hope hearts at both ends of Kent are lifted at the sight.

It’s worth recalling that Michaelmas daisies are officially ‘asters’ or stars, and stars can guide the wise.

13 September: ‘Her Father Took Some Persuading’.

‘Her Father Took Some Persuading’ – that’s what I wrote about Saint Eanswythe yesterday. Eanswythe wanted to found a monastery for women, a place of prayer, community and scholarship.

Thank God these gifts are available freely now to women in many parts of the world. In Eanswythe’s Kent Saint Anselm’s Catholic School offers all three. My daughter is now a teacher herself, working with four- and five-year-olds.

Did I take much persuading to act as Mr Noah for one of her projects? Why hit on me for the job, anyway? Judge for yourself and then enjoy the Lord’s sense of humour.

And he said to them: Which of you shall have a friend, and shall go to him at midnight, and shall say to him: Friend, lend me three loaves, because a friend of mine is come off his journey to me, and I have not what to set before him. And he from within should answer, and say: Trouble me not, the door is now shut, and my children are with me in bed; I cannot rise and give thee. Yet if he shall continue knocking, I say to you, although he will not rise and give him, because he is his friend; yet, because of his importunity, he will rise, and give him as many as he needeth.

And which of you, if he ask his father bread, will he give him a stone? or a fish, will he for a fish give him a serpent? Or if he shall ask an egg, will he reach him a scorpion? If you then, being evil, know how to give good gifts to your children, how much more will your Father from heaven give the good Spirit to them that ask him?

In the ‘Dark Ages’ there seems to have been a high degree of enlightenment among the noble women of England and Wales. Think of Hilda or Winifride. Not such dark times at all.

There are people ready to cast our own time as a new dark age. But once again, I suggest, not so very dark.

Think of today’s Saint Eanswythe: like her niece Mildred of Minster, a Kentish maid. Eanswythe  died around 640, just 43 years after Pope Gregory sent Augustine to convert the people of Kent. She was not the first teenager to feel that marriage was not all a girl could aspire to. The cloistered life appealed: prayer, community and scholarship. Her father took some persuading, but with his help she founded the earliest sisters’ monastery  in England, overlooking the sea at Folkestone. She was a brave pioneer.

No sign of her original church remains, but Eanswythe’s relics were successfully hidden at the Reformation and can now be visited at the Church that bears her name.

And today’s young people? Here is part of a reflection from Ignatius who was at the World Youth Day in Krakow:

The entire World Youth Day was one big Holy Communion, in which I found Jesus over and over and over again. We were all there together, being made one, by the one body, the one love, of our one Lord.

Now, the real challenge begins: to take God’s mercy home with us and out to the world…

I have always wanted the truth.

And there is many another to give us hope. God be with them. And may he help Team Agnellus to proclaim the Truth in all our posts.

Women may have been seen as second-class humans in past ages, yet there have always been saints who stood aside from  what society and family expected of them to live as God called them to.

While aristocratic women may have had more resources to be able to arrange this, they would have been lined up for profitable marriages arranged by others. Not necessarily a doorway to happiness or fulfilment at any level. We have already met the Saxon princesses Eanswythe and Mildred who were given the grace to hear the call and to convince others that they were doing God’s will by entering religious life. Clare was another such aristocrat, and an influence still felt today.

Let us pray to God our Father:

Saint Clare, Pray for us.