Here’s something to ponder on, today being the feast of Saints John Fisher and Thomas More, two martyrs with Kentish connections: Cardinal Fisher, bishop of Rochester and More, chancellor of England, both fell foul of Henry VIII. The post is taken from a footnote to The Life of Johnson, Volume 5 by James Boswell.

Addison says:—’The end of a man’s life is often compared to the winding up of a well-written play, where the principal persons still act in character, whatever the fate is which they undergo…. That innocent mirth which had been so conspicuous in Sir Thomas More’s life did not forsake him to the last. His death was of a piece with his life. There was nothing in it new, forced, or affected.’ *

‘A death-bed’s a detector of the heart.
Here tired dissimulation drops her mask.’+

More’s innocent mirth was able to bubble up at his execution in large part because he had been able to prepare himself for this moment, and to approach it fully conscious.

On the other hand, a deathbed may be a scene of agitation for the patient and distressing for witnesses because physical decay impacts upon thought processes and muscular self control. Scenes at the end of life do not necessarily reflect the true state of the principal character; those who lived with the dying person should and will remember many precious, shared moments. And it is to be hoped that the right medical care will make the patient as comfortable as possible, so that they can approach death with serenity.

But let us pray for the grace to be ready to die at any moment, accepting that we will always leave behind plenty of unfinished business.

I met Revd Jo Richards this morning, resigned to another delay in opening up church buildings and services, as she relates below. Good News, though, is that the Commemoration Service for Thomas More will be happening, even if there will be restrictions on numbers. If you cannot be there in person, you can follow the service on live streaming.

Good morning to you all on another glorious summer day. I hope this finds you all well as we are here at the Rectory.
It would appear that the lifting of covid restrictions will be delayed for a month; we will no doubt hear more this evening from the government, but all covid precautions are maintained across our three churches with the mandatory wearing of face coverings, unless exempt and social distancing, receiving of the host in one kind, and no singing. Prayers for those who are planning weddings at this difficult time, and all the uncertainty that entails.

May I encourage you to come along to this service which marks 50 years of this annual commemoration held in St Dunstan’s. From Rev. Brian McHenry: It is good to announce that the service to mark the melancholy anniversary of St Thomas More’s execution will return this year to St Dunstan’s after the necessary intermission last year. The speaker will be Dr Jonathan Arnold, the Diocesan Director of Communities and Partnerships, who is an expert in late medieval and Reformation church history. His subject is ‘Profit and Piety: Thomas More, John Colet, and the London Mercery’. The service will also be live streamed.

Every week  Bishop Rose and the three archdeacons for our diocese, along with other members of the senior team have invited us throughout lockdown to join them for a discussion, as to how things are going, with a theme each week – and today we focused on ‘safe places’ – places where we go where we feel safe, where we can be open to God – often in the quietness we hear that voice. For some it is sitting on a beach, or being in a garden or going on a walk; for others it is delving into a book – or a hobby in which we feel safe and secure. For many it is their homes, and very local environment, and the thought of venturing further afield, especially as lockdown eases is itself quite daunting; though one must remain ever mindful that with domestic abuse (and other abuse) the home has not always proven to be that safe place. My ‘bolt hole’ is the Quiet View at Kingston , somewhere where one can be still in the presence of the Lord; and it is important to identify these places – even during the course of the day, to have that Quiet Time. I use a free App: Pray as you Go – which has the gospel reading for the day, prayer and reflection, and is an excellent start to the day, but we are all different and God speaks to each and everyone of us in different ways.
St Thomas More: On Monday we would have had our service in St Dunstan’s Church for St Thomas More, but like so many other things, that wasn’t to be; however Rev. Brian McHenry, who is part of our St Thomas More Committee will be leading a short service 7.00 Monday evening,.
Medieval Pageant: This weekend was also going to have seen our Medieval Pageant pass through the streets, with the focus on Becket 2020 (so much was planned for this year!) However, the team who put it together are doing so virtually, and if interested please follow here: https://www.facebook.com/canterburymedievalpageant/

September 12. Before the Cross XXIII: above the Altar 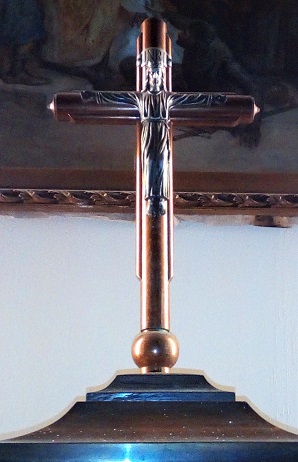 Let us read this small crucifix is in the Martyrs’ Chapel at Saint Thomas’ Church, Canterbury. Christ wears an alb – the cord or cincture around his waist makes this clear. Alb, of course, means white, the colour of the baptismal garment, the colour worn by the saints in Heaven in Saint John’s Book of Revelation, the colour worn by the priest at Mass. So this is a Eucharistic Cross. Christ is shown as a priest and a king. his crown a royal one, no longer one of thorns. His hands are raised to heaven, even as they are nailed to the cross, in a gesture familiar from the Mass. his face, like his body, is serene: he looks down to us even as he offers our prayers with his sacrifice to the Father.

But there is another dimension to this particular cross. Do not be completely distracted by it if you visit our church, but beneath the crucifix is a reliquary with Relics of Saint Thomas of Canterbury. 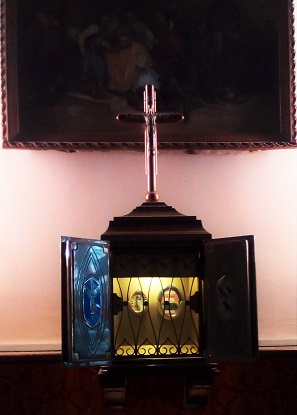 There are two relics in the reliquary above the altar. That on the right contains a small piece of Saint Thomas’ vestment in which he was buried, and the one on the left one of the Saint’s  finger bones. The bone was brought to Canterbury on 20th December 1953 by Dom Thomas Becquet, a collateral descendant of Saint Thomas and Prior of the Abbey of Chevetogne, Belgium. It is thought that these small relics were removed from Canterbury in 1220 by Cardinals from Rome who came to witness the translation of Thomas’ remains to the new shrine in the Cathedral.

So the statue of Christ can be seen as offering the martyrs’ blood to God with his own: not  just Thomas but three Reformation Martyrs with local connections, Saints Thomas More, John Fisher and John Stone. Nearby is a relic from halfway across the world: a vestment worn by Saint Oscar Romero. In an exchange of gifts, this came to Canterbury for another bone of Saint Thomas sent to the Cathedral of San Salvador. The man who brought about this link between two cities with martyred Archbishops was Fr John Metcalfe, a local priest working in El Salvador. We are all one family.

25 June: A bridge once crossed by Saint Francis: Relics XVII. 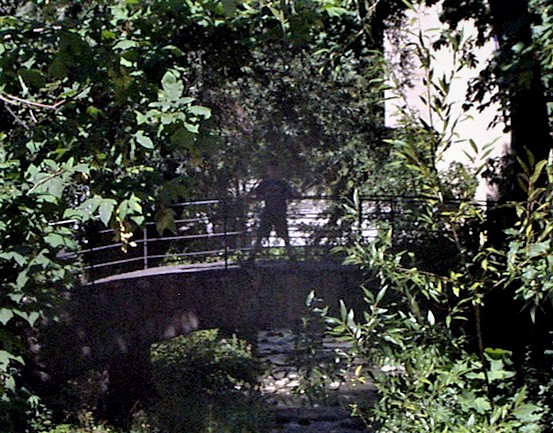 When I lived in Gap, France, I must have crossed this little bridge more than once. That bed of dry stones can be a torrent when the snows melt on the Charence mountain. But this was midsummer, and George was walking a different path to the rest of the family, and posing in the shadows.

I can’t remember how I learned that St Francis crossed this bridge on his travels to preach the Good News, but it’s not something I’d have made up! Considering the number of bridges he must have crossed, is it all that special, other than because it is very old? How many other good and famous people have used it – apart from our George?

There are fragments of wall in the next street to ours, that were once the garden wall of the Roper family; Margaret, the mother, was Thomas More’s daughter; he came here to Canterbury, and it was here that she brought his head for burial in Saint Dunstan’s church, just up the Whitstable Road out of town.

Flesh and blood that I am, eyes and ears and mouth and nose, I appreciate these unsung links with the past. George, around the time this picture was taken, used to climb up a fragment of the Roman wall of Canterbury on his way home from school every day, and I let him; it’s not as though I’m crazy for relics. But we are one family and, as Jesus himself suggested, the Father can make these stones sing out (Luke 19:40). So let’s listen to them.

Francis was told by God to rebuild the Church; he began with a derelict chapel, and a movement of men and women still follow him today; he was in a hurry to preach Good News when he crossed this bridge. Thomas More lived at another time of turmoil and died a martyr after imprisonment in the Tower of London, away from the Canterbury Bells and other flowers in his daughter’s garden.

I cycle past the Roper’s place without a thought most mornings. I did not think of Francis as I went parish visiting in Gap, but it is good to be reminded that our lives criss-cross with those who have gone before us. If God brought them safe thus far, to Gap or Canterbury or even the Tower, he can surely lead us home.

Wednesday 22nd June: I will search for the lost 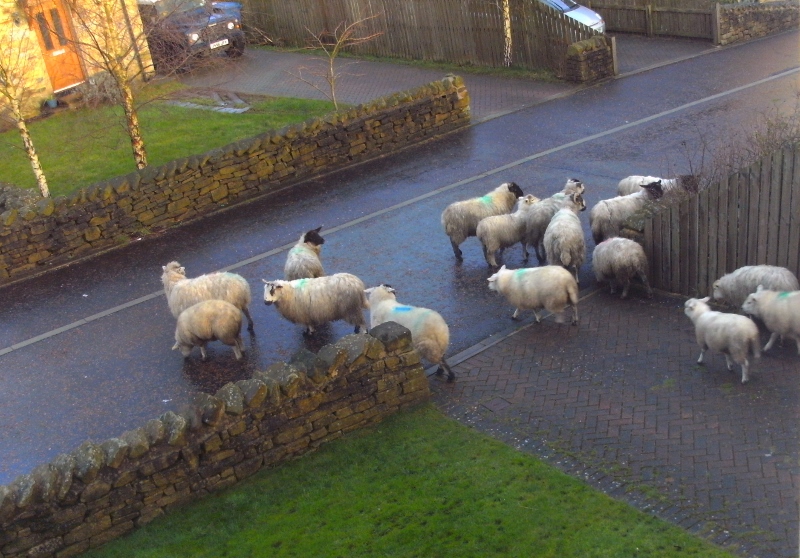 Ezekiel 34:16 ‘I will search for the lost and bring back the strays’

Today’s Feast, commemorating the martyrdom of Saints Thomas More and John Fisher, causes us to think of a time when kings had almost unlimited power and would let nothing and no one stand in the way of what they wanted.

The Gospel presents us with a different view of a king, a king who called himself the ‘Good Shepherd’, whom he spoke of as putting himself in danger and enduring hunger, cold, etc. to hunt for and bring back – without chastising them – his lost sheep, by whom he meant his subjects.  Jesus was a King who cared about his subjects and their wellbeing, which he put before his own comfort.

With God in charge, we can rest secure – as the Psalmist said: ‘I will lie down in peace and sleep comes at once, for you alone, Lord, make me dwell in safety.’ (Psalm 3)

It is the responsibility of a king to show integrity, and of a human being to be true to the bond of friendship.  Christ the King is the model of human integrity, and even goes so far as to call us his friends.  Although we have sinned, gone astray, sought happiness elsewhere, God never stops seeking us, longing to show us His great mercy.  Following His example, may we have the grace to extend mercy and friendship to our fellow men and women, as God has shown mercy to us.