1 January. The Franciscans come to Alvernia, VIII: a New Start and a Second Welcome.

Back in October, we left Francis and his companions newly arrived at Mount Alvernia, where they were welcomed by the birds. News of their coming son reached Orlando, the landowner who gave them leave to live there. Although we might think how idyllic this life might be, the picture shows what weather can do in the area. Not great for comfortable camping!

Orlando, hearing that Saint Francis with three companions had climbed up the mount of Alvernia, for to dwell there, rejoiced with exceeding great joy, and on the following day set out with many of the folk of his castle, and came to visit Saint Francis, bringing with him bread and wine and other victuals for him and his companions; and being come there, he found them at prayer, and drawing near unto them, saluted them. Then Saint Francis arose, and with great love and gladness gave welcome to Orlando and his company; and this done, they sat them down to have speech of each other. And after they had somewhat spoken together, and Saint Francis had given him thanks for the holy mountain that he had given him, and for his coming thither, he besought him that he would let build a poor little cell at the foot of a fair beech tree, the which was a stone’s throw from the place where the brothers lived, for that place seemed to him very fit and hallowed for prayer. And straightway Orlando let build it.

And as it was drawing near unto evening and it was time for them to depart, Saint Francis preached unto them a little, before they took leave of him; and when he had preached unto them and given them his blessing, Orlando, finding he must needs depart, called Saint Francis and his companions aside, and said unto them: “My brothers most dear, I would not have you suffer any bodily want in this wild mountain, whereby you might the less be able to give heed to spiritual things: and therefore I desire, and this I say to you for once, for all, that ye send to my house for whatsoe’er ye need, and if ye do otherwise, I shall take it ill of you.” And this said, he departed with his company and returned to his castle.

March 20: A Sandwich for Saint Cuthbert 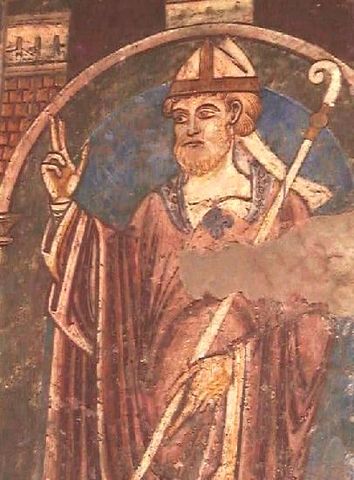 March 20 is the feast of St Cuthbert, who died on this day in 687. There is a story that one Friday, the bishop of Lindisfarne, Saint Cuthbert was welcomed into an isolated farmstead by a woman who offered to feed him and his horse. ‘Stay and eat’, she said, ‘for you won’t reach home tonight.’ But Cuthbert would not break his Friday fast, so he rested a while, let her care for his horse, and pressed on his way. It got dark well before he was in sight of home so he found shelter in a tumbledown, empty, isolated shepherd’s hut.

Here his horse began to pull down the thatch of the roof to have something to eat, but even Cuthbert could not see thatch as food for a man, however hungry he might be. The horse carried on attacking the roof, making the best of what was available in this wild place. As it pulled at the thatch, a packet fell to the floor; when the good bishop opened it he found bread and meat, the meat still warm. He shared the loaf with his beast as he gave thanks to God. How did the meal get there? Was it concealed by the hospitable woman as she tended his horse back at the farm? Cuthbert did not know, but he was happy to eat what was provided after his day of fasting had finished – for like the Muslims at Ramadan today, he would have counted sunset as the day’s end.

In Muslim countries today, many Christians will observe the fast in solidarity with their neighbours. So  let us enjoy our sandwiches – yes, even in this season of Lent – to thank the Lord who provides the food, as Cuthbert did, and to share in the ministry of hospitality, like the woman on the farmstead.

Cuthbert in a wall painting at Durham Cathedral.

Photo from thepelicans.org.uk where you can read Abbot Cuthbert’s obituary and an address he gave for the Missionaries of Africa to whom he remained close. http://thepelicans.org.uk/obituaries/obits24.htm#pjohnson