7 January: Creationism or a Theology of Creation?

If the word Creationism had not been grabbed by those who hold a literal understanding of Old Testament texts,  it would fit a theology that sees us as creatures of God, but also stewards of creation, working to nurture and repair his work. That’s what I would call creationism. Creation in the here and now, not thousands (or even millions) of years ago, is our calling.

Oh well, no point bleating  about names! Time for a New Year’s resolution: boringly, it’s back to public health, planting trees, picking litter, making our corner of the world a little grander: and praising the Creator of it all. Laudato si! (And look out for tomorrow’s post.)

The USPG people (United Society for the Propagation of the Gospel) are building a theology of  creation worldwide. Here is another of their prayers.

Creating God, you have invited us to be co-creators with you and to care for your Creation. We repent of our neglect and ask that you help us to be responsible stewards of Creation and to work together for the preservation of the world.

Amen to that: Laudato Si!

More prayers from USPG at http://www.uspg.org.uk/pray

December 15: Once we realised our mistakes…

Professor Kate Bulinski is a paeleontologist at Bellarmine University in America. I wanted to share her guest blog at the Vatican Observatory website, as it challenges us to face up to our responsibilities to observe God’s Creation and our part in it – and to start to restore, renew and revive what we have unwittingly damaged. Here is a short sample from her post. Click on her name above to read it in full. A good Advent read. Let’s pray for the enthusiasm to carry on despite the odds, like these children, digging at Aberdaron beach, despite the rain.

I sometimes ask my students to contemplate what the fossil record of the 21st century would look like. Would we have layers of sediment embedded with plastic debris and electronic waste? … What would future humans (or our evolutionary descendants!) have to say about this era of Earth history? And perhaps more importantly, what would God say about how we responded to the charge to care for creation and how we responded once we realized the mistakes we were making?

November 13. Remembrance and beyond

During the Second World War in Britain, while men were fighting and the war effort seemed to be paramount in people’s minds, in the background other politicians and civil servants were drawing up plans for important areas such as housing, health and education. This time it would be a ‘land fit for heroes’. In the event, prefabricated houses and schools were erected with a speed and in numbers never again seen and the National Health Service came into being.

A better housed, better educated and generally healthier population was the result. But planning can only go so far, as the Times Literary Supplement columnist Charles Morgan pointed out.

In all the plans that are made for the life we are to lead, how seldom is there evidence of any wish that life shall be enjoyed: that it shall be safe – yes; that it shall be instructed, equalised, rubbed smooth, supplied with dustless corners and chromium-plated taps; but that there shall be grace or charm or quiet or gaiety or sweetness or light in it, there is among the sterner planners neither hope nor desire. Utility and sameness are their guiding stars … Their ideal is to make of the art of life what a timetable is to a poem.1

He wrote, of course, from a position of privilege, and exaggerates in his last two sentences to make a polemical point. Certainly I have visited prefabs that have lasted nearly three times their planned lifespan, are light and airy, and well loved by those who have made their homes therein. And G.K. Chesterton considered timetables poetic; especially when they work! And what joy, post-war, when such things could be more or less relied on again!

Seventy years ago today, Pope Pius XII issued his encyclical letter Auspicia Quedam. He was writing to ask people to ask Mary’s prayers for peace in the Holy Land. We begin with his reference to the similar call to prayer he made during the Second World War.

6. It was comforting for Us in past years to appeal earnestly to all – especially to the young so dear to us – to crowd around the altar of the great Mother of God during the month of May imploring the end of a cruel war; so now, similarly today, by means of this encyclical letter, We invite you not to cease from this pious practice and further to prayers add resolutions for Christian renewal and salutary works of penance.

7. Above all, speak to the Virgin Mother of God and our most tender Mother words of most heartfelt thanks for having obtained, through her powerful intercession, the long desired termination of that great world conflagration, and also for so many other graces obtained from the Most High.

8. At the same time, implore her, with renewed prayers, that at long last there may shine forth, as a gift from Heaven, mutual, fraternal and complete peace among all nations and the longed for harmony among all social classes.

Let there be an end to dissensions that redound to no one’s advantage.
Let there be a reconciliation of disputes that often sow the seeds of further misfortunes.
Let international relations, public and private, be fittingly strengthened.
Let religion, the foster mother of all virtues, enjoy the liberty to which she is entitled.
And let men set about their peaceful work of abundant production for the common welfare – with justice their guide and charity their motive.

Not all of us feel comfortable with praying to or with the saints, and Pius’s language does not fall naturally on every ear. But we can all pray for Peace, especially in the Holy Land. 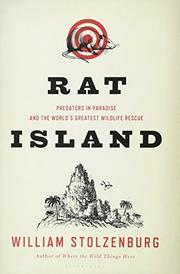 From the first I was sympathetic to the thesis of this book. When I read it, the squirrels in a nearby empty house had been culling unripe apricots from our tree, taking a quick nibble and throwing them away. That is a minor annoyance compared to the devastation described in Rat Island. This book charts how humankind has unwittingly damaged many species of animals and plants and driven some to extinction.

The story goes back hundreds of years and could be told across the world, but Stolzenburg concentrates on islands: those colonised by boat people around the Pacific Ocean, including New Zealand and Hawaii, and a number off the coast of North America, including the once aptly named Rat Island.

Until recently it seemed that simple human greed and ignorance had killed the forests of Easter Island, but rats were introduced to islands, sometimes for food, often accidentally. They prevented any regeneration of Easter Island forests by eating tree seeds. Elsewhere the rodents chewed through plants, insects, and brooding seabirds, upsetting the balance of nature, wiping out endemic species.

Control measures often made things worse. Weasels are as partial to eggs as the rodents they were supposed to eliminate in New Zealand, and satisfying their appetites drove the flightless, ground nesting Kakapo parrot to the very edge of extinction. Foxes, too, were all too happy to dine on nesting seabirds, literally sitting ducks.

Stolzenburg describes, in sometimes breathless prose, the faltering attempts to safeguard endangered species, and the resistance that fieldworkers and scientists faced from politicians, the public and well-meaning naturalists concerned about cruelty to rats dying from poison. He also documents the transformation when habitats were restored to the creatures that belong there. A good, informative read that puts next door’s squirrels into a global perspective. If you take Christian stewardship of creation seriously, it’s worth reading this well-researched and referenced book.